[TRAILER] A dramatic history of Pu Yi, the last of the Emperors of China, from his lofty birth and brief reign in the Forbidden City, the object of worship by half a billion people; through his abdication, his decline and dissolute lifestyle; his exploitation by the invading Japanese, and finally to his obscure existence as just another peasant worker in the People's Republic.

Currently streaming in the US on HBO Max and Criterion. JustWatch listing.
posted by DirtyOldTown (3 comments total) 4 users marked this as a favorite
"Drink the green ink."
posted by Halloween Jack at 10:49 AM on January 18

This was one of those films that have always stuck with me ever since my parents took me to see it in the theater. The mouse throwing scene is burned into my mind, as well as the cricket, which for whatever reason, I guess the dying minutes of a dynasty are burned into my mind via animals and insects. It was probably one of my first big exposures to Chinese history, granted, as presented from a Western perspective, outside of whatever I saw on the news (i.e., Tiananmen Square). When people talk about historical biopics, lush cinematography, gorgeous costumes and scenery, this is a film that definitely comes to mind.
posted by Atreides at 12:01 PM on January 18 [2 favorites]

I remember the huge wash of colours from the scene where he ran through the hanging clothes, just billows of colour and - it's such a gorgeous painterly film. The filming that was lowered down in my memory - from a child's height to view this massive world. And then later the detached grey scenes, the smallness of his world. I would love to see it again but it needs a big screen for you to be enveloped inside the worlds of the film.

This was the film I picked for my tenth birthday party cinema trip. I was later also banned from choosing videos at boarding school for the same reasons.
posted by dorothyisunderwood at 5:21 PM on January 18 [5 favorites] 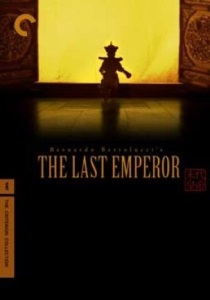