[TRAILER] A penniless drifter (Gary Cooper) is recruited by an ambitious columnist (Barbara Stanwyck) to impersonate a non-existent person who said he'd be committing suicide as a protest, and a social movement begins.

Directed by Frank Capra. Screenplay by Robert Riskin, from a screen story by Robert Presnell Sr., based on Richard Connell's 1922 story "A Reputation," as published in Century Magazine. Music by Dimitri Tiomkin.

Currently streaming in the US on more than a dozen services, however, many of these were sourced from low quality prints of the film after it slipped into public domain. Worse yet, several--like the version on Amazon--are colorized. The best version streaming is actually the one on Internet Archive, which seems to be sourced from a 2001 restoration.
posted by DirtyOldTown (1 comment total)
I love this movie, and I love Hero, but I don’t think I ever connected the two consciously in my mind.
posted by gauche at 6:53 AM on January 20 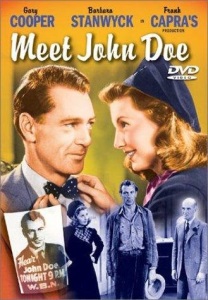