Wracked with grief over a death, Rowan is out of control and unfit to perform surgeries. In New Orleans, Deirdre and her mysterious companion work together to draw Rowan home.

Some differences from the books in this episode:

- Rather than the lawyers having a document with a promise not to go to New Orleans, we have a falsification of adoption agency history creating the mystery of the parentage, that creates the search for New Orleans

- With television, we get less Talamasca records, and more direct flashbacks, such as Donnelaith and Suzanne. Additionally, Suzanne seems to be fully functional, rather than "simple-witted", as she was described in the books.

- Lasher appears to have two witches at a time - appearing to both Deirdre and Rowan simultaneously.
posted by corb (3 comments total)
The Dark Place? "I know writers who use subtext and they're all cowards."
posted by rhamphorhynchus at 9:44 AM on January 23 [1 favorite]

Coming back to this- I feel like giving us the hope of a Deirdre/Rowan meeting and then taking it away felt much, much crueler. I also think that sixth floor stop will wind up having been significant.

Some of the reviews reference Deirdre’s throat having been “invisibly cut before Rowan’s eyes” but to me it looked like she was already dead, just standing. My money, however, is on Carlotta.
posted by corb at 10:07 AM on January 23 [1 favorite]

I really disliked the novel + series this is based off of, but I am trying it out if only to support the whole Immortal Universe thing AMC is doing.

When I watched the panel for this show at NYCCC, it struck me as a very CW-looking show and the first ep did little to change my mind. However, this episode was much better and I enjoyed the ending.

Maybe they just needed to get out of the hospital and over to NOLA to catch my interest. I was excited to learn that the hotel Rowan is staying in is a real hotel and I very much want to stay there now!

I'll keep with the series until they go too far into basically the entire Lasher book.

PS: They're also doing a podcast for this series like they did with interview, and it's an entertaining/interesting 45 minutes each week.
posted by haplesschild at 11:16 AM on January 24 [1 favorite] 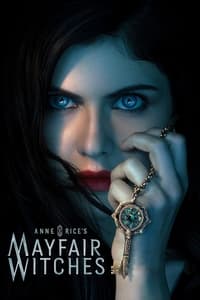