[TRAILER] In the early years of the 20th century, Mohandas K. Gandhi (Ben Kingsley), a British-trained lawyer, forsakes all worldly possessions to take up the cause of Indian independence. Faced with armed resistance from the British government, Gandhi adopts a policy of "passive resistance," endeavoring to win freedom for his people without resorting to bloodshed.

Currently available for digital rental in the US. JustWatch listing.
posted by DirtyOldTown (6 comments total)
It bears mention that this is not whitewashed casting.

Ben Kingsley is the stage name of Krishna Bhanji, who was born in England to an English mother and an Indian Gujarati father.
posted by DirtyOldTown at 12:47 PM on January 23 [8 favorites]

Also a blink-and-you-miss-it appearance of a young Daniel Day Lewis as a teenage ruffian.
posted by ishmael at 3:22 PM on January 23

I know this film had issues but it's a hell of a spectacle and I had one of the best theater experiences of my life seeing it. We went as a family on opening weekend to see it at a huge theater showing it in 70mm in Manhattan with a mostly Indian audience. It was such an experience that we went back the next weekend.
posted by octothorpe at 7:39 PM on January 23 [4 favorites]

I'm fairly sure that this movie had the most Indian actors that I'd seen in my life up to that point.
posted by Halloween Jack at 8:14 PM on January 23

To me this is a truly old school type of movie that they don't make anymore. That even when it was released it was this big, grand, slow, stodgy, important movie in an era of more fun and fast and slick blockbusters. It kind of closed that era. And as for the funeral scene, hundreds of thousands of Indians came to be extras; it's the largest "cast" in any movie by far.
posted by zardoz at 12:11 PM on January 25 [1 favorite] 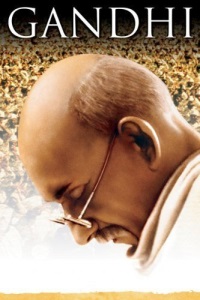