"At Hector's (Peter Sarsgaard) 40th birthday party, his cousin slaps another couple's child, which causes secrets to spill and turmoil amongst the family in the remake of the Australian series based on the novel by Christos Tsiolkas." [Metacritic]


Not the strongest possible opening episode, I thought, but a great hook and an intriguing beginning.
posted by Countess Elena (4 comments total)
I wanted to like this show but good god, it was laying it on pretty thick. Forget the misbehaving little shit, SMACK these people are yuppies SMACK these people are hippies SMACK this guy is the bad guy.

Zachary Quinto starts in his very first introduction being an asshat driving a fancy car being an asshat, sounding off Fox News talking points, being an asshat, and being the only one in the show not in an interracial relationship aside from the parents from the old country, who get to show their old country cred by telling Sarsgaard to get his woman under control. Could it be any more obvious that he's going to be the Problem Guy?

And then the hippie couple. Not only is Mr. Hippie an artist and Ms. Hippie walking around larping Laura Ingalls Wilder, but she's also breast feeding a 5 year old. We get it, they're liberal and permissive, do you have to lay it on so thick?

I mean, I'll be sticking around to watch the other 7 episodes because why not, but dude. Subtlety. Your viewers are not complete morons.
posted by phunniemee at 10:17 AM on February 13, 2015 [2 favorites]

Just realized the original Australian series is on free hulu if anyone else wants to watch those alongside of this one.
posted by phunniemee at 10:20 AM on February 13, 2015 [2 favorites]

Your viewers are not complete morons.

Amen! And maybe I don't watch enough network TV dramz anymore to know how common this brand of Painful Literalness is, but oy, that third-person omniscient narrator who repeatedly stated the obvious? No. Just shut up and show us already, please. We could have easily figured out for ourselves that Hector wants to bang the babysitter and is having a midlife crisis. These folks were reduced to caricatures, instead of given some layered, nuanced depictions.

The cast members sure are pretty though. So many real-life New Yorkers, too. And from so many of my favorite movies. Melissa George and Zachary Quinto were my personal faves in this ep. "YOU MONSTER!" lols. Mary-Louise Parker was originally asked to play Uma Thurman's part, but unfortunately backed out.
posted by hush at 11:11 AM on February 13, 2015

Connie was very cute and nerdy. Her mannerisms annoyed me but I found her true to life.

I wondered if they enhanced Zachary Quinto's hairline to make it extra low to stress the point. He looks very different in real life.
posted by Dragonness at 5:38 PM on February 16, 2015 [1 favorite] 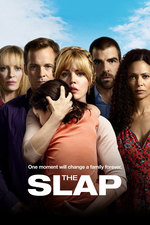