After a bitter divorce, an actor disguises himself as a female housekeeper to spend time with his children held in custody by his former wife.


"My first day as a woman, and I'm getting hot flashes."

Robin Williams won both a Golden Globe and the American Comedy Award for his turn as Daniel/Mrs. Doubtfire. The film also starred Sally Field as his ex-wife Miranda, Pierce Brosnan as Stu, and Lisa Jakub, Matthew Laurence, and Mara Wilson as the three Hillard children.

In the book, however, the two older children are immediately aware of the ruse and it is only the youngest child who is fooled by the disguise.

"It was a run-by fruiting."


Mr. Williams remains this film's main and only real attraction (although Ms. Field tries gamely to generate sitcom-caliber sparks). He is well worth seeing whatever he's wearing, but he's most fun in an anarchic mode, threatening to blow the film's illusions wide open. The dress, the mask and Mrs. Doubtfire's gentility are inherently limiting, but nothing holds Mr. Williams back when he's on a roll.

Any review of "Mrs. Doubtfire" must take into account Dustin Hoffman's transvestite comedy, "Tootsie," which remains by far the better film: more believable, more intelligent and funnier. "Tootsie" grew out of real wit and insight; "Mrs. Doubtfire" has the values and depth of a sitcom.

Hoffman as an actor was able to successfully play a woman.

Williams, who is also a good actor, seems more to be playing himself playing a woman."

CAN A MOVIE BE BOTH A DELIGHT AND A drag? Yes, if its name is Mrs. Doubtfire. Simply put, I've rarely laughed so much at a movie I generally disliked.

The film was directed by Chris Columbus, the writer of Gremlins (1984) and The Goonies (1985). Columbus also directed Home Alone (1990) and Home Alone 2 (1992), Harry Potter and the Sorcerer's Stone (2001) and Harry Potter and the Chamber of Secrets (2002). He is currently wrapping up Pixels and is credited as the executive producer and writer on the planned (but on hold) reboot of Gremlins.

The makeup was cutting-edge at the time, and Greg Cannom, Ve Neill, and Yolanda Toussieng received the Academy Award for Best Makeup for their work on the film. The makeup took 3-4 hours to apply each day, and this video gives a behind the scenes look at the process that went into the creation of Mrs. Doubtfire.

"You must be the new maid - Euthanasia Dumbwaiter?"

Robin Williams was attached to star in Mrs. Doubtfire 2 at the time of his death. The sequel is now likely never to be made. However, there are plans to turn Mrs. Doubtfire into a musical.
posted by nubs (19 comments total) 6 users marked this as a favorite
[apologies for being off the regular schedule for the Robin Williams Movie Club and to joesph conrad is awesome for requiring her to remind me to do this, and a hat tip as well for giving me the initial bits of a framework for creating the post]
posted by nubs at 7:21 PM on February 16, 2015 [1 favorite]

Hah, hardly anyone seems to be aware there even was a book. Which I have read, actually (as a kid). From what I recall Mrs. Doubtfire wasn't a cheerful English old lady, but more of a ah....Carmen Miranda-ish kooky figure.
posted by jenfullmoon at 8:10 AM on February 17, 2015

Great post! I was amazed to learn that the movie was based on a book - and one that was shortlisted in the UK for several book awards, so it was somewhat well-known, in the UK at least. I would love to hear from some British Mefites if they remember reading it as a book first.

I wasn't a fan of this movie when it came out - I was too cool for school - but it's kind of grown on me over the years and it has to be one of the most-loved Williams movie of his output. I guess the main thing that I recall is that the makeup involved in transforming Williams was cutting-edge and people were most impressed with it at the time; now it may look a little too rubber-masky, but back then it was like "whoa!"

This movie is also fondly remembered in the San Francisco Bay Area, as the "Mrs. Doubtfire" home is in S.F., and the restaurant scene was filmed in Danville at Bridges Restaurant. Here's a bit more about the filming locations for this movie.

(The KTVU Channel 2 local news station was adjacent to some of the filming for Mrs. Doubtfire and on occasion the newscasters like to talk about seeing behind-the-scenes stuff, and their memories of Robin Williams.)

Oh, and I wanted to drop this link because it uses scenes from this movie very effectively (and is just really well done and obviously affectionate): Robin Williams - "Seize the Day" - Melodysheep.
posted by joseph conrad is fully awesome at 8:36 AM on February 17, 2015

The last time I watched Mrs. Doubtfire, two things hit me: First, it's one of the most densely written comedies I think I've ever seen. Like, seemingly every line of dialogue is meant to be a joke. It's exhausting. They're not good jokes, of course, but still require your mind to complete whatever subtle mental processes go into processing jokes. Second, it's shockingly transphobic. Were Mrs. Doubtfire released today, everyone involved in its production would have to issue public apologies.

Williams, who is also a good actor, seems more to be playing himself playing a

To be fair, this is basically all of his comedic roles.

I love this movie mainly because I love watching Robin Williams. It absolutely has problems--quite apart from the transphobia, the utter lack of chemistry between Stu and Miranda is just terrible.

Thing is, for me, every single problem with the movie is redeemed by this. Maybe it's afterschoolspecialy, but I was a kid of (thankfully) divorced parents, and I'm queer, and it resonates. "But if there's love, dear, those are the ties that bind."

Excuse me the onion fairy has visited.
posted by feckless fecal fear mongering at 1:31 PM on February 17, 2015 [3 favorites]

That reminds me, I really enjoy the regal performance by Anne Haney - she's quite memorable as the social worker.
posted by joseph conrad is fully awesome at 7:43 PM on February 17, 2015

We read the book in year 7 (11/12, first year of secondary school). I remember a couple of things from it.

1)Robin Williams character poses for life drawings and his kids catch him doing it. Much awkwardness ensues
2)There's a bit where, for some reason, a character sings "anything you can do, I can do better". At the time, I often volunteered to read, being a strong reader. I gamely sang the song there. Needless to say, shortly thereafter I was mercilessly mocked by the class bully. It didn't help that I had a strong list. As a result, I have a bit of a grudge against that book. And 11 year old boys. Well, really 11-16 year old boys to be honest.
posted by Cannon Fodder at 1:37 AM on February 18, 2015 [2 favorites]

The thing that bugs me on a rewatch (not recently, mind, in the last couple of years), is that (other than the transphobia) the film has this irritating mens rights attitude to custody, where Daniel is presented as a saintly figure who loves his kids and should get to see them whenever he likes. I mean, really, filing for divorce because your husband brought a zoo for his son's birthday has to be the most surreal reason ever presented.
posted by Cannon Fodder at 7:39 AM on February 18, 2015 [3 favorites]

One of the deleted scenes lays it out in better detail--always in and out of work, never helps around the house, and the zoo is just evidence of irresponsibility.
posted by feckless fecal fear mongering at 8:00 AM on February 18, 2015 [2 favorites]

I've never actually seen Mrs. Doubtfire, but I've watched Chachi 420, a Hindi film with enough similarities to Mrs. Doubtfire to be worth noting here. But if the original doesn't have kung fu action and an adaptation of the Macarena, I think I don't want to know.
posted by Monsieur Caution at 8:49 PM on February 18, 2015 [1 favorite]

the film has this irritating mens rights attitude to custody

As a kid of divorce being raised by a single mom the scene in the courtroom made my skin crawl. I could never express why exactly but it always felt really wrong to me and I always fast forwarded or changed the channel for that scene.

I saw this when it came out. I was 8 and I remember finding the politics of it deeply uncomfortable. I have no recollection of what in particular bothered me so much about it. But it was definitely the first time I remember thinking, "I find this movie offensive." I think I didn't like that he thought it was OK to trick the kids' mom and there were a lot of jokes about how humiliating and weird it was to be a woman when you usually are a man, which as a young girl I was like, "Well! Hmph!" I'm sure the transphobia went right over my head.

I figure if it bothered me as a not terribly self-aware 8-year-old who idolized Robin Williams I probably don't need to do a rewatch.
posted by town of cats at 7:55 PM on February 20, 2015 [1 favorite]

Yeah thinking about it as an adult divorced mom, if my ex husband decided to pretend he was a woman and try to babysit inside my home I would be calling the cops and fully expecting they put him away for many, many years.
posted by corb at 12:22 PM on February 24, 2015 [1 favorite]

Newly posted deleted scenes from the movie, which would have made it less sunny
posted by potsmokinghippieoverlord at 7:59 PM on February 8, 2016

Whoa. I'd seen the spelling bee scene before, but not the other one.
posted by feckless fecal fear mongering at 11:02 PM on February 8, 2016

I really loved this movie as a child, and I think it was mostly because my parents had divorced within the previous couple years of the movie's release, and it was very contentious and the custody battle was ongoing (and would be ongoing until I pretty much turned 18). So to have a movie that had a divorced couple actually come to an agreement and end up in a co-parenting situation really touched a nerve with me.
posted by LizBoBiz at 8:53 AM on June 21, 2017 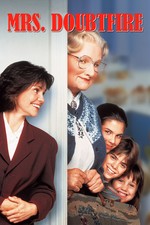