A veteran attempts to discover the truth about a devastating attack on his unit in Vietnam years earlier, while reality crumbles around him and gives way to demonic, nightmarish visions.


Stars Tim Robbins, Elizabeth Peña, and Danny Aiello, directed by Adrian Lyne. This film was hugely influential both in terms of atmosphere and visuals, inspiring, amongst many other things, the Silent Hill video games.

You might also enjoy this, this, and this deleted scene. They're not terribly spoilery, but should probably watch them after seeing the movie.

This is part of the MeFi Horror Club series. More info on MeFi Horror Club.
posted by Joakim Ziegler (10 comments total) 1 user marked this as a favorite
Freaky movie, particularly the part where Robbins is being wheeled through the hospital.
posted by Chrysostom at 10:57 PM on April 24, 2015

I liked this way more as a kid than I do now. I remain impressed by the use of only in-camera effects, though. And it was sampled by DJ Shadow extensively for both "Midnight in a Perfect World" and "Rabbit In Your Headlights."
posted by infinitewindow at 11:13 PM on April 24, 2015

And even when I was a kid I thought that Elizabeth Peña's character was not depicted warmly or fairly by Adrian Lyne.
posted by infinitewindow at 11:19 PM on April 24, 2015

%n: "I remain impressed by the use of only in-camera effects, though."

As an aside, I was recently bidding in an auction for stuff from the FX house that did a lot of the Jacob's Ladder practical effects. I didn't get anything because prices ballooned in the end, sadly, but they had the masks used for the "shaking head" effects, and they're interesting and surprising: They're several faces superimposed, with several sets of eyes and mouths, and built in "motion blur". I can't find any pictures of them now, but they're actually kind of uncomfortable to look at, they mess with your face recognition and make your head hurt, you can't quite focus on them.
posted by Joakim Ziegler at 11:40 PM on April 24, 2015 [6 favorites]

%n: "And even when I was a kid I thought that Elizabeth Peña's character was not depicted warmly or fairly by Adrian Lyne."

I agree, though I still had the biggest crush on that character. The whole party scene in particular is weird and sexual and nightmarish, it pushes a lot of my particular buttons.
posted by Joakim Ziegler at 11:42 PM on April 24, 2015

So, if anyone's curious about those shaking head FX masks, I fished an image out of my browser cache. It's zoomable and pretty good quality. The one on the left in particular messes with my eyes when I try to focus on it.
posted by Joakim Ziegler at 11:53 PM on April 24, 2015 [14 favorites]

I just saw the announcement post so didn't have a chance to rewatch the movie yet, but man, Joakim Ziegler, those masks are messed up.

This movie taps into my biggest fear though. For a long time I have been worried that I am like a little bit mentally handicapped, but just not aware of it so that when I meet friends or something right after I leave they say "Wow, that Literaryhero really does well for himself, considering..." And that's not a far jump to my Shutter Island fantasy that actually nothing around me is real and that I am actually chained up in a musty basement pooping in a bucket and being fed rotting fishheads ( served from a bucket visually identical to the poop bucket, I hope they wash it) and just imagining everything.
posted by Literaryhero at 5:55 AM on April 25, 2015 [3 favorites]

The one on the left in particular messes with my eyes when I try to focus on it.

Hold your hand up over the image and then slowly move it down, first over one set of eyes, then over each subsequent set of eyes, each nose, and each mouth. Linger over each one, allowing yourself to distinguish each one as a separate element.

The first time I looked, it was making me squint, but after i tried the above, I was able to look at it without too much difficulty and was able to see all the different parts.

Everyone has mentioned things about the movie, so I will bring up something that hasn't been yet: the movie's depiction of New York City. Jacob's Ladder encapsulates almost perfectly the late 80s NYC I had grown up seeing in the movies, TV series, and on the news, a hellscape of urban and social decay. The city for me is as much a character as any of the humans.
posted by Fukiyama at 8:17 PM on May 6, 2019 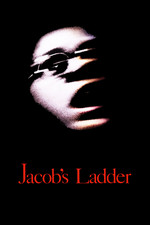