When Bureau Chief Wuntch (returning guest star Kyra Sedgwick) gives the Nine-Nine unlimited resources to close an unsolved $21MM robbery case, Holt automatically suspects that his people are being set up to fail. Meanwhile, when children from a top Brooklyn magnet school tour the precinct, Terry tries to get a foot in the door for his girls, Cagney and Lacey.


Argh! I thought I'd posted this on Sunday, but apparently in my late-night grogginess I mistook the preview screen for the actual posted recap. Apologies to anybody who wanted to chat this one up.

BONUS STUFF: In the spirit of catching up, here's something that eluded my attention from this past January: A 45-minute conversation with the entire B99 cast at the Screen Actors Guild Foundation. Topics include the origins of the show, how the cast found their characters, and the improv-friendly nature of the show.
posted by Strange Interlude (5 comments total) 2 users marked this as a favorite
Also, if you watch the SAG video closely, you will note that Stephanie Beatriz is wearing a shirt with the delicately filigreed words "FUCK OFF" embroidered on the collar. It is adorable.
posted by Strange Interlude at 8:57 PM on May 14, 2015 [3 favorites]

Yeah even if the rest of the 2 seasons had been crap which they are not, Capt. Holt saying Velvet Thunder would be worth every single minute.
posted by Uncle at 10:47 AM on May 15, 2015 [2 favorites]

Stephanie Beatriz's sunny disposition in the SAG video kinda freaks me out.
posted by whuppy at 6:53 PM on May 16, 2015 [1 favorite] 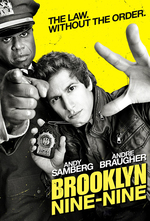