Its the one with tons of awkward sexual experimentation!

McKinley and Ben perfectly embody that feeling immediately after kissing your crush when you're 17. They'll be going to the staff party together.

Arty "The Beekeeper" Solomon tucks everyone into bed with his luscious voice, and begs McKinley for ten more minutes before going to dreamland himself. Neil awkwardly tries to make himself feel at home in a Tuxedo, in preparation for Shari's arrival. He's worried that Victor is making too big a deal about their prior bet, and doesn't want to pressure Shari into anything, but Victor knows that a keg puts any girl "in the mood" and that he'll be fighting the sex off with both hands all night himself. All that's left is for them to just saturate their junk in aftershave, which doctors don't really recommend anymore.

Lindsay is on the phone with her editor and she simply cannot write this story anymore. She tells him that she's known these people for 12 hours (which is a filthy fucking lie - it's 10:00 p.m. and she got there at lunchtime) but in any case she won't betray them. Her editor gives her until midnight to call in the story. Lindsay has to choose between the scoop of a lifetime or the greatest friends she'll ever know.

At the party, Ben is spinning platters as "DJ Ski-Mask," which is just stupid. I mean, if you've only got Bradley Cooper for one day of shooting, why would you hide that face behind a full mask for all of the night shots? Think it through next time, Wain. Katie approaches Andy for some hot dancing but instead he serves her up some cold dinner: Mu Shu Pork, specifically, which she just might like the taste of, if she tried it.

Elsewhere, Neil is walking through the camp with Shari (Beth Dover) and both of them are dressed like it's prom for some reason. She spouts some raunchy-ass cusses in order to prove that she can hang, but Neil would have loved her regardless. Someone shouts an old catchphrase from inside the Roundhouse. Probably Amy Poehler.

Victor shows off some of his tried-and-true sex-gettin' moves, but the hunt is long and more nuanced than amateurs would have you believe. He heads to the keg, whereupon he meets Rhonda, the choreographer. She could be down for some sex, it seems, especially with someone as unquestionably experienced as Victor. She tells him to meet her at his bunk, and bring 1-4 prophylactics. Off he runs!

Coop enters with Donna and Yaron, who have finished Coop's makeover by adorning him with an awesome vest and an earring that might also be a fly-fishing lure. When Neil and Shari come in, Coop and Gary talk up Neil like wo, telling Shari that, "You, specifically, cannot do better."

Victor goes to the general store, which has recovered nicely from the earlier fire, and attempts to buy some condoms. This is awkward for him, so we can assume that, being the first day of camp and all, this isn't Victor's normal condom guy, and perhaps that Victor normally goes bespoke for this purpose (but then why wouldn't he have just brought a bunch? You know what, nevermind.) He gets the rubbers but it's stressful for all involved.

Back in the ROundhouse, Andy is singing a song about wolves and everybody gets into it. Over this, Lindsay dictates her article over the infirmary phone to a staffer back at Rock & Roll World Magazine:

"Last Paragraph: Maybe it's true what they say. Teenagers are archetypes. And if so, they were all here. The nice guy, the popular girl, the rebel, the goodie-goodie, the ladies man, the sweetheart, the theatre kid, the flirt, the wild man, the sidekick, the jock, um... that guy, never seen her before, 'Weird' Al Yankovic, and finally the one I fell in love with. Last sentence: Everyone was represented at camp firewood, and everyone was welcome, including me."

Shari is just mentioning how much she likes Neil's camp friends, when J.J. puts his finger to his nose. Everyone around the circle follows suit, with Shari not getting it, until Neil has no choice but to do the same. What happens next isn't fit for children, and involves a lot of yelling and snouting and crawling around on the floor, but they might as well have doused her with pigs' blood. Things will never be the same for her again. Neil chases after her, but come on, man.

Abby, who is somehow not officially a counselor yet despite having menstruated for several hours by now, takes advantage of the counselors' absence in the bunks to teach all the other campers "seven minutes in heaven." Abby starts and draws Kyle's name out of the hat, a prospect which doesn't thrill Kyle in the least.

That said, Kyle at least knows there's an endpoint to his particular "heaven," a luxury Coop isn't granted as Yaron yanks him and Donna to go "fill up" an empty room. They run into a glowing post-coital Gail and Jeff, who are still trying to get used to calling each other "ex."

In the bunks, its Amy's turn, and she draws Kevin's name. Hooray for narrative! But Abby says Amy cheated and draws Drew's name for her. Faced with his last chance, Kevin makes a Hail Mary plea for Amy to be his girlfriend. She sweetly turns him down, saying she doesn't like him that way. It's pretty gut-wrenching and cringey all around.

Well, out of the frying pan and into the fire as far as that all goes! As Yaron starts getting fresh with the quite-into-it Donna, Coop is liking this threesome idea about as much as he always did, and he doesn't really like making out with Donna at Yaron's command either. Almost like he felt kind of pressured into this whole situation. After he storms out, and Yaron worries that he won't be hard much longer, Coop decides none of this is worth it, and maybe he and Donna aren't the perfect match he'd hoped. He also gives her back that stupid hat.

Rhonda and Victor land in Victor's bed with great force, but he just can't get around these cheap factory-model rubbers. But what's this?! Rhonda claims that Victor, our champion sex-haver, is in reality a virgin! And he only denies it a couple of times before admitting it! She's sweet, tells him to save his "moment," and gives him permission to say they got it on because she "likes to appear unstable."

Nurse Nancy gets a call from Glen (Gary Kraus), a friend from nursing school who is now a typesetter at none other than Rock & Roll World Magazine! That's who Lindsay secretly works for! And that's what everybody learns now! Nancy, J.J. and the rest confront her as she attempts to bolt in the night. She pleads with them that they're her best friends in the world, but friends don't sell each other out, Lindsay. Eric lands the final, most cutting blow, calling her a "bloodsucker" (or perhaps "vlad-sucker") before smashing up his cabin like it's a hotel room or something and destroying his new master tape.

In the Roundhouse, Andy is still icing Katie, and she snaps and demands to know what's up, when Andy gives a lesson in romantic speechifying that Kevin probably could stand to learn. "Those weren't Billy the Convict from Indiana's lips kissing your lips tonight. Those were Andy's lips. Those were my lips. And don't even try to tell me those were hard-nosed Electro City DA Pamela Needlehoffer's lips kissing my lips; those were Katie's lips a.k.a. your lips!" She realizes that the two of them aren't actually angry at each other, and Katie's lips make out a lot with Andy's lips.

Of course, Blake's binoculars witness this, and he crashes the FOxtrot to cheer on the rest of the Tigerformal for war, but that's for the finale.

David Wain might get more comedic mileage out of reaction shots than any other director working. My winner for tonight is the CTC woman who just bitterly shakes her head when Blake calls them all out for laughing.
posted by Navelgazer (10 comments total)
At the party, Ben is spinning platters as "DJ Ski-Mask," which is just stupid. I mean, if you've only got Bradley Cooper for one day of shooting, why would you hide that face behind a full mask for all of the night shots?

I feel like there's a pretty good chance that's only Bradley Cooper in the one shot of that scene where he takes the mask off and then puts it back on, and the rest of the shots are somebody else filling in for him.
posted by tomorrowromance at 2:30 PM on August 7, 2015 [4 favorites]

Exactly. DJ Ski-Mask happened so they could easily have a double and shoot 99% of the party scene before Cooper arrived on the last day of the shoot.
posted by doctornecessiter at 3:23 PM on August 7, 2015 [2 favorites]

I thought it was funny how the Kevin storyline followed the Coop storyline so closely. There was no training montage for Kevin though...
posted by codacorolla at 6:59 AM on August 8, 2015

(As a note, my weekend is crazy busy, these write-ups take forever due to how stupidly involved I made the first one and my dedication to that level of follow-through, and nobody reads fanfare when they're not at work anyway, so I think the thrilling conclusion is going to have to be published Monday. Thanks, everybody!)
posted by Navelgazer at 7:22 AM on August 8, 2015 [3 favorites]

I was basically Kevin at summer camp, so I kind of want to punch that little red-headed shit really hard.


Is this a particularly adult way to handle my own childhood issues? Probably not.

JJ endlessly tearing up the story was my fave.

I know I have a relative who has the same ugly couch as the one in the Roundhouse, but I can't remember who and it's bugging me.
posted by rewil at 9:40 PM on August 20, 2015

We want it all
Our time is coming soon
We walk it off
A-whistlin' our tune
Thunder in our heads
Flowers in our beds
I saw you
oh-wa-oh-wa-oh
Oh, I am a wolf
oh-wa-oh-wa-oh
Way out in the woods
oh-wa-oh-ohh
Oh, you are the moon
posted by sweetmarie at 3:54 PM on August 22, 2015 [3 favorites] 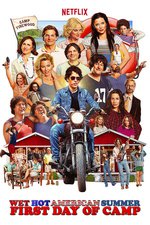