Jaye, Mahandra, and Sharon visit a Native American reservation where Sharon sparks up an old college rivalry with a local catching Mahandra in the crossfire. Jaye, meanwhile, has a conversation with the deceased seer and tries to get the woman's accountant grandson to find his spiritual gift, despite the signs saying that Jaye is, in fact, the chosen one.

An interesting palette cleaning episode before we go headlong into the Dog Day Afternoon that is Caged Bird. The director was an action veteran and the dramatic camerawork seemed to fit the spiritual and fanatical elements of the story. I still have some hesitations on some of the hoary and heavy-handed Native American aspects, one commentator on the AV Club says

I live not too far from the Falls and I have a few friends who live on the reservation. They were disgruntled by the fact that they used a made up tribe rather than the Seneca Nation (member of the the Iroquois confederacy, there are around 30-50,000 people of the tribe who still live in Western New York. It's also where everybody buys their smokes from.) What seemed to gall them (slightly) was that the made up tribe had far more in common with the tribes in the northwest than the northeast. Obviously nobody from the show had bothered to check with the actual indigenous people there.

Also, they couldn't figure out why the hell anyone on a tribal council would try to keep outsiders from buying cigarettes on their land. It's the major source of revenue for them."

Both Deanna and Bill are played by Native American/First Nations actors.

I haven't been following along with the rewatch, but I remember when watching this umpteen years ago I thought this episode absolutely destroyed any momentum that had built up from E11. To the extent that I was convinced there was some kind of production order vs air order issue, but since everything was unaired, obviously not.

I also didn't much like the episode on its own merits, but I might've been speeding through to the end of the series at 2am.
posted by tjgrathwell at 5:39 PM on September 7, 2015

This is as close to an explanation of the muses as the show gets. Too bad it's not that close.

On the other hand, Mahandra's Indian-ness, the cigs, and Diana were a hoot.

I felt like this was as close as you needed for an explanation for the muses, but other people seem to disagree.
posted by john-a-dreams at 10:55 AM on September 9, 2015 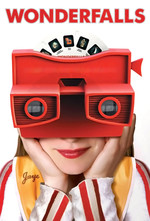