The Weirdmageddon has started! Bill Cypher has broken through the portal, and he unleashes a newer, much cooler version of reality!


With Gruncle Ford captured and the books destroyed, Dipper realizes the only hope for saving humanity is for him to save his sister. Along with Furiosa Wendy and Soos, he heads towards Mabel’s prison bubble, steps inside, and [TO BE CONTINUED]
posted by 1970s Antihero (9 comments total) 2 users marked this as a favorite
Wow, was that a DARK episode! Some really creepy imagery. I'm not sure I trust Gideon becoming a "good" guy. I liked Wendy's competence (and I enjoyed the shot of them as real people going through one of the bubbles - was that the creator and his real sister in the car?). I am not sure how they are getting out of this one.
posted by wittgenstein at 7:58 AM on October 27, 2015 [1 favorite]

That was some wild shit, some of which was genuinely frightening. Like, damn. I was chatting with a friend while we were both watching it, and our chatlog had a lot of shrieking and NO NO NO happening. I genuinely wonder how Alex Hirsch got this one past the suits at Disney, because this was some acid trip levels of messed up and terrifying. (The thing with Pacifica's dad! WHAT THE FUCK, that was so horrifying) I did find the detour into Mad Max land to be a lot of fun though.

was that the creator and his real sister in the car?

That was the voice actors for Dipper and Wendy, Jason Ritter and Linda Cardellini.
posted by yasaman at 8:06 AM on October 27, 2015 [1 favorite]

That was the voice actors for Dipper and Wendy, Jason Ritter and Linda Cardellini.

> I genuinely wonder how Alex Hirsch got this one past the suits at Disney, because this was some acid trip levels of messed up and terrifying.

Hirsch also finally got a spin-the-bottle reference in, apparently by turning it into "spin the petrified human."

It's perplexing why Bill Cypher locked away Mabel with the shooting star symbol? Why didn't he just kill her like he did with presumably a whole bunch of other people/time travelers this episode. I hope the answer is not "plot armor" but instead has something to do with the wheel from the opening credits.

Also Bill Cypher is a very fun/horrifying villain and it was crazy to see him finally unleashed. Oh yes, and Louis C.K. as that giant head/arm monster that wanted people to get into his mouth. Also amazing.
posted by john-a-dreams at 3:38 PM on October 27, 2015 [1 favorite]

Yes, wow, this was dark. My four-year-old just got out of bed, upset, and, in a little quivering voice, asked "Daddy, is Bill Cypher real?" She's enjoyed watching Gravity Falls with her older siblings, but I think I would have kept her out of the room for this one if we had realized how disturbing it would be. The thing with Pacifica's dad freaked me out a little, and I haven't be four in a long long time.
posted by Pater Aletheias at 6:39 PM on October 30, 2015 [2 favorites]

When is the frigging next episode?
Monday Night (November 23).

After that, series creator Alex Hirsch has announced that Gravity Falls will end with a one-hour series finale that will air sometime in the next few months.
posted by oneswellfoop at 2:05 PM on November 21, 2015 [1 favorite]

Is their a connection between the time baby and the immortal babies from Regular Show?
posted by drezdn at 12:26 PM on November 23, 2015 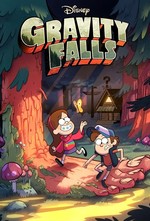