6 teams travel from the Netherlands to Krakow on the 8th leg in a race around the world.


This episode featured the travelocity app (less obnoxiously that the fitbit stuff), a barge pool, salt mining, street music, pushing pianos v, pushing mining carts, the expectation that taxi drivers care that you are in a race, racers arguing about taxis they aren’t getting anyway, doing things the hard way, getting lost, complaining, more Justin-hate, dancing, begging for money, crushed fingers, over-reactions, identifying food, and the Shindler Museum whose information design looks really good from the depiction on the tv.

It was a non-elimination leg which was clearly foreshadowed.
posted by julen (6 comments total) 1 user marked this as a favorite
The inevitability of a Green Team win is just depressing. My husband and I were wondering - to what extent do you think the casting of this season was specifically designed to make them power players? There are just so many bland, "meh" teams, which seems unusual, and there seem to be a lot more stupid decisions being made than usual.
posted by olinerd at 1:49 PM on November 15, 2015

I am hoping for a miracle and that anyone but them will win. I don't have a lot of confidence that the others will beat them, though. Best chances are, it seems to me, 1. Reporters (enh), 2. Team Texas (dumb), 3. Mom and Son (he keeps picking things she'll struggle with), 4. Cheerleaders (don't deal with setbacks well), 5. Paparazzi (how do they work AND live together?).

These other teams feel largely like watered down versions of popular teams from the past, and most of the engaging teams are already out. I don't think it was deliberate, but I do think there was a lot of casting based on pairing type rather than individual merit. Funnily enough, the Green Team was probably cast to fit in the Ordinary Dude is a Big Fan of Show slot but is really the Overbearing Dude We Don't Get Why She Is With Him.

Next season, we're getting another thematic casting season (because the blind/committed Dating season worked out so well) - All social media stars
posted by julen at 2:32 PM on November 15, 2015

It wouldn't be the first time that there was one dominating team that just got out ahead of everybody and could not be stopped. But it does make for a less-than-exciting finish.

I totally would have rocked the Roadblock. : ) I'm surprised that they had such a hard time identifying some of the dishes - I thought something like kugel would be more common.
posted by SisterHavana at 11:47 PM on November 15, 2015 [1 favorite]

This is the same crew that have been on a positive spree of interesting pronunciations, so ...

I think for next week's thread, I'm going to set the episode # to all (MeTa Announcement of new TV post types), and we can use the one thread to finish off the season (unless anyone has any objections!)
posted by julen at 5:48 AM on November 17, 2015

After 26 seasons (I started following this show in Season 2) this might well be the one that finally gets me to give it up.
posted by DevilsAdvocate at 9:08 AM on December 4, 2015 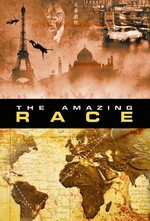