"Hill presents a detailed annotated version of Wilder's autobiography, written between 1929 and 1930, which served as the basis for the ever-popular and successful "Little House" books. A successful columnist and editor, Wilder chronicled 16 years of the Ingalls family's moves through Kansas, Missouri, Wisconsin, Minnesota, Iowa, and the Dakota Territory in the late 19th century, offering vivid descriptions of the land and people as well as the ups and downs of frontier life. Though daughter Rose Wilder Lane heavily edited the manuscript, it was never accepted for publication. Wilder eventually fictionalized many of the incidents described here for her "Little House" series and strove to portray the spirit of the time and to illustrate the courage and adaptability of the people who settled the frontier. Using census data, newspapers, and other primary documents, this volume is heavily annotated and puts into perspective the original autobiography and how that manuscript evolved into the fictional stories. ... "Little House" devotees will appreciate Hill's thorough examination of Wilder's life and times." -- School Library Journal


This is the December Historical Fiction Book Club book, and is our one selection that is not, by itself, historical fiction. Rather, "Pioneer Girl" is the autobiographical basis for the beloved historical fiction "Little House" books.

The Guardian Review: "Pioneer Girl reveals that the incident with Mrs Brewster was just one in a succession of encounters with serious domestic violence. For most of Laura’s childhood, she lived in close proximity to drunks, rapists, horse thieves, adulterers and more than one murderer, including perhaps a brush with a notorious family of serial killers."

Slate Review: "And even in cases where Wilder smooths things over, Hill’s generous annotations provide the juicy backstory: Aunt Docia’s divorce, a neighbor’s illegitimate pregnancy, and the tragic fate of Cap Garland, to name just a few. The real Clarence Brewster, whom fans will remember as a naughty schoolboy in Laura’s first classroom as a teacher, was later convicted of manslaughter."

Historical Fiction Book Club Club Page including calendar of upcoming reads
posted by Eyebrows McGee (8 comments total) 5 users marked this as a favorite
The strangest fact I learned from this book was that Laura and Almanzo went on dates to a roller rink. On the prairie. In 1884.

Creepiest comment from the book, although I've known for years that Almanzo was 10 years older than Laura and not 5ish as portrayed -- multiple townspeople comment to Laura that they'll probably get married because "A grown man doesn't chase after a schoolgirl so long unless he intends to marry her."

Longstanding question the book failed to answer: "What, exactly, did Ma think of all of this?" It's ALL VERY WELL for Pa and his itchy foot, but Ma was cultured and also female and having babies and defending the homestead against terrifying grifters and so on in massive isolation on the frontier and you never get a real sense of her opinions on her life in the books.

Rev. Alden is SUPER shady; the story of the Rays and the Welches is NUTS and nobody would believe it as fiction, good call not putting it in the books; there is a lot more terrifying drinking and attendant violence than in the children's books; and Rose Wilder Lane was in a lesbian literary relationship with the author of the Sue Barton novels, this book was everything I dreamed of AND MORE.
posted by Eyebrows McGee at 8:34 AM on December 1, 2015 [10 favorites]

As a huge RWL/LIW buff, love love love this book. It had previously been available to scholars, but the annotations and editing (putting different versions of the draft together) are priceless. I read it from cover to cover without stopping during one of the blizzards in Boston last February.
posted by Melismata at 9:01 AM on December 1, 2015 [1 favorite]

Just got this from the library, and I'm *really* excited to read it. (Though perhaps afraid of having childhood Little House illusions shattered, as well ...)

Something about Thanksgiving at our house this year (communal home cooking, nostalgia, being cooped up with family for the long winter weekend?) brought out everyone's vaguely remembered Little House anecdotes:
posted by teditrix at 10:23 AM on December 1, 2015 [6 favorites]

I've been slowly working my way through this book, and it is fantastic.

I love the behind-the-scenes looks into how Laura and Rose chose to frame certain stories for children, and how different parts of Laura's life slid around like a jigsaw puzzle to form the overall/fictionalized Little House on the Prairie narrative. It's an fascinating reminder that autobiography is still subject to the demands of storytelling - obviously more so in the case of Little House on the Prairie (which was never intended to be a 100% truthful retelling), but eye-opening none the less.

Another thing I've found particular interesting is the notes about how often the family (the entire family!) would become sick from diseases that are preventable today. I believe they note that Laura and Rose condensed some of the different illnesses the family suffered because they didn't want the books to become repetitive. It's a sobering yet inspirational reminder of how far we've come medically in less than 150 years, and of how well vaccines in particular have worked to reduce or eliminate common forms of suffering.
posted by blithers at 11:32 AM on December 1, 2015 [2 favorites]

This was a great reminder to pick up the book- reading it now. I'm very interested in how the central book was used by both women as a source for multiple stories.
posted by PussKillian at 6:05 PM on December 1, 2015 [1 favorite]

I read the first half of this about a month ago and I've picked it up to finish the second half right in the middle of the long winter.
I enjoyed the introduction very much - I didn't know much about Rose and LIW's lives. I'd gotten the impression that the series was mostly written by R and I was delighted to be wrong. It's fascinating to see the progress of the vignettes as the original text is compared to the later versions. I'll have to decide whether to read R's work.... So weird that she was this best-selling author and now no one has heard of her except through her mother's work. I bet that would piss her off.
posted by bq at 9:35 AM on December 3, 2015

I read a few reviews that were grumpy that the annotations were pretty strongly directed towards a "Laura Ingalls Wilder did SO write most of the books" slant, to counteract the claims by the Ghost in the Little House author who pretty much, if I understand correctly, says that Rose was the real creative entity behind the books. Besides the accusations of partisanship in the Laura/Rose debate, there were claims that some of the annotations were wrong. If anybody has more on this, I'd be interested to hear about it. I've come down on the idea that Wilder was genuinely part of the authorship, not just a storyteller with no literary gifts, but that Lane did have a lot of input and the two women really worked in tandem for big chunks of the project. It seemed like the two women did argue over where to divide fact vs fiction and excitement vs building a sense of place.
posted by PussKillian at 1:37 PM on December 9, 2015

sorry to be so late to the party, but I forgot all about this book club.

I was one of the lucky few who pre-ordered pioneer girl months ahead of time and received it the day it came out, and of course, I read it right away, so it's been a while.

Though i'm a huge fan of the show, I actually didn't read the Little House books until I was an adult. And when I read the Little House books, I read them on the lookout for libertarian propaganda. I had heard that Rose edited the books and that she edited them in a way that promoted her ideology. I was surprised to not find much. The only thing I remember clearly is in The Long Winter, when the family is near starving, Laura says something about asking a neighbour for help and Ma says "Laura! You're not suggesting we depend on other people, are you??" There's a clear tone of shock and horror there.

But then when I read pioneer girl, I could very much see how the stories were changed to make it look like everyone was doing everything all on their own. Most shocking was learning that A) THe family received welfare (i.e. state food and supplies provided for free to victims of the locusts and B) That Pa had the family up and leave town in the middle of the night to avoid paying their debts. There were some other examples, too: The grass fire that ma fights alone in the Little House books is actually fought with the help of neighbours and a few other examples like that. I guess you can't see the editing unless you see the original.

Also, the annotations about the science of locusts were fascinating.

Also surprisnig, the wedding: Laura and Almonzo just go off the see the miniister by themselves and come back married. The family didn't even go to the wedding!

Also, again, I wonder how Mary felt about her role in the Little House books. In the Little House books, she goes off to college with fancy new clothes and buildls a life for herself there and even goes on a holiday with the rich family of a fellow student. In RL, she apparently went to a trade school where she learned to make brooms and then lived out her life with Carrie.
posted by If only I had a penguin... at 8:59 AM on March 6, 2016 [1 favorite] 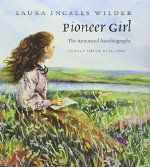