Sunny becomes uncertain about MK's powers as Quinn sends them out to hunt down the Widow. Jade steps up as the Fort is lacking the cogs for the poppy harvest, while compromising with Lydia. Ryder seeks the truth about MK's pendant.


To steal the joke from the AV Club, poor little Evander Holyfield, he was just a little too ambitious for his britches.

I wonder if Jade is really dead, but I was looking for something to go down between her and Lydia. That little bonding moment wasn't believable for a second, plot-wise, not because the actresses are not up to snuff, they certainly are, one thing I appreciate is that all the actors are doing the best they can with the limited dialog (the more experienced ones anyway, but at least Aramis Knight is finding his angsty-teen-with-hidden-power footing).

Guys, I feel so bad for Tilda! Poor girl wants to kill and love at the same time. I hope she makes it out of this season alive.
posted by numaner (9 comments total)
I did a literal fist-pump when Lance Henriksen showed up on screen as Ryder's grandad. That man makes basically anything more awesome, but he has a particular knack for making cheesy dialog sound believably compelling, so he should be great here. Hope we see a bunch more of him.

I doubt Jade is really dead. (I don't think that bonding moment was intended to be convincing.) I am wondering if Lydia really poisoned her, or if perhaps she mildly poisoned herself in order to make Lydia look guilty to her husband - Jade finding out, last week, about the other wife that died of poison, doesn't make much sense if she was just gonna wind up poisoned anyways. She's either using that info to frame Lydia and/or she's got an antidote worked out already and just needs to get to it.
posted by mstokes650 at 2:06 PM on December 15, 2015 [1 favorite]

oh yeah, I forgot that I had that thought right at the end of the episode. Now that I remember, I am more convinced that she poisoned herself.
posted by numaner at 3:29 PM on December 15, 2015

I agree with the AV Club about this one: best one yet, and the theme of deception led to some really great moments. However, the show remains held back by keeping Sunny's motivations completely opaque: I don't even understand his plan at this point. It seems to me like he should have either killed Quinn or fled by now. (Sunny seems very duty oriented, but it seems that the law of the land is that the strong should take what they want: Quinn himself ascended to Baronhood by replacing his former boss. Now that he's both going insane and dying, it seems like the *honorable* thing to do would be to put him down, but take care of his family or something. I mean, the tumor could push him to make all kinds of strategic mistakes that destroy the entire territory, potentially even destabilize the Badlands.)

That said:
* The Widow fight was just *excellent*. (I still think the AV Club called that one too: she should be the protagonist.)

* Lance Henriksen could sell any dialogue, no matter how ridiculous. Dude just projects severity, and I was also happy to see him.

* I am also in the 'Jade poisoned herself' camp, unless something else is shown next week.

* Waldo's talk about his own precarious position was pretty cool. (I also liked them lampshading how ridiculous it is for someone to gain a new power because they're disabled.)
posted by mordax at 11:40 AM on December 16, 2015

haha Waldo's just trying so hard to underplay his abilities.

I remember in the 2nd or 3rd episode Sunny said something along the line of "If Quinn dies the other Barons would immediately surround and attack us and it would make leaving that much harder." So that might be why he's willing to obey and help Quinn for the moment, and why Veil is actually trying to keep him alive, despite her admittance to his face that his default state is war. The characters are actually pretty complicated and interesting when you really give them a chance.
posted by numaner at 12:18 PM on December 16, 2015

I remember in the 2nd or 3rd episode Sunny said something along the line of "If Quinn dies the other Barons would immediately surround and attack us and it would make leaving that much harder."

Trouble with that reasoning is that they offered Sunny the barony when he met Zephyr - they said if Sunny deposed Quinn and dealt with them, they would honor his claim. It's very likely they were being straight with him: they seem to want business as usual, and Sunny is a business-as-usual kinda guy. (That would have gotten them what they wanted from Quinn without any risk: they just want the Widow's stuff. Getting it without losing troops is great.)

From a strategic standpoint, that would have been a smart call for him: he protects Veil. MK is outta luck in that scenario, but per the earlier complaint, it's extremely unclear how important that is to Sunny.

(It was even a good call if he wants to run: taking out Quinn leaves the place in chaos, and it removes the one guy who would be interested in hunting him down if he did go AWOL.)

So yeah, baffled by Sunny right now. It feels like he wants to escape the cycle entirely, but that he won't move until he already has a roadmap, plan and tons of gas. And that he's unwilling to harm Quinn to get it.
posted by mordax at 4:10 PM on December 16, 2015

The characters are actually pretty complicated and interesting when you really give them a chance.

Oh, and meant to say: I agree about that in every other case, just not Sunny. I actually feel like most of the characters have very well put together motivations and characterizations. (People rag on the dialogue and whatnot, but honestly, the Widow's a lot of fun. I have a great picture of how Quinn's household runs or does not run. I even feel like the little touches at the parley offered some great insights into how the world works.)

It's possible his actions are entirely internally consistent, but they need to offer some insight about why he's remaining loyal to Quinn even though it conflicts with his stated - and secretly planned - personal goals.
posted by mordax at 4:24 PM on December 16, 2015

I think Sunny is just doing his damnedest to not do anything until it's forced on him. And the plot is just going to keep piling it on until action is inevitable. Kinda like Hamlet, maybe?
posted by ODiV at 7:06 PM on December 17, 2015

Just caught up on the series (damn inflight wifi will make downloading tonights episode impossible). Its totally a gorier version of the popcorn worthy martial arts TV shows I grew up watching.

I really wish I came upon this series in season two or three - I really want to see the maps of the Badlands / Territories, and know more about the world the characters are saying such cheesy dialogue in.

The Widow is devoted to tearing down the system, her conversation with Tilda makes it pretty clear that rape and violence against women is a common component of the status quo, and she wants to end it (possibly the death of her husband was the result of her protecting Tilda?). I definitely see her as a protagonist who currently wants to kill one of our other protagonists - I don't know how long the conflict will last, or if Quinn is going to survive the season.
posted by mrzarquon at 12:37 AM on December 21, 2015 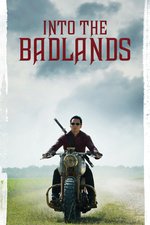