A young woman discovers her visiting "Uncle Charlie" may not be the man he seems to be.


If Fanfare allowed for film double-bills, I would have combined Shadow of a Doubt with last week's post about The Third Man. The similarity of the central theme of both films is striking: sheltered naif discovers some very unpleasant truths about a beloved old crony.

Shadow of a Doubt hit theaters in 1943, while The Third Man premiered in 1949. The horrors of World War II were perhaps more evident to expatriate Brit Alfred Hitchcock than they would have been to many American filmgoers: Hitchcock's mother was dying during the course of filming but because of the war Hitchcock was unable to visit her. With that shadow on his mind, Hitchcock worked closely with screenwriter Thornton Wilder to give the filmgoers an eye into the dark underside of smalltown American life. Several people are believed to have contributed to the screenplay, including veteran actress Patricia Collinge, who plays young Charlie's mother Emma.

If the central storylines of "Shadow" and "The Third Man" are fairly similar, it's interesting to compare Holly Martins, bumbling writer of pulp Westerns, with Charlie Newton, recent high school graduate and best debater in her high school class. It is unlikely that young Charlie Newton, sheltered as she is, could ever have grown up to be quite as clueless as Holly Martins. However, without the agent of her awakening in the form of her uncle, with whom she has an intense mental connection, it's not clear how much this young woman could have come to know about what happens when you "rip off the front of houses." Both Martins and Newton are ultimately the agents of the deaths of their once beloved nemeses, Harry Lime and "Uncle" Charlie. And, funnily enough, the actor who plays the villain of "Shadow," Joseph Cotten, would go on to play Holly Martins in "The Third Man."

And, of course, young Charlie is female while her evil twin is male. Much has been made of this being a "misogynist" film: more recent commentators have argued strenuously against that. However you land on that question, some of Hitchcock's favorite preoccupations are very much on display here. Note how everyone is so obedient to the traffic laws and the nice traffic cop: the only person to transgress those rules during the course of the film is young Charlie, who has more important things on her mind. (One of the funniest AND most telling lines in the film comes from perspicacious preteen Anna Newton on the phone with the local Western Union rep: "I'm trying to keep my mind free of things that don't matter.") After young Charlie breaks the traffic rules (twice), she is promptly manhandled into compliance, first by the cop and then by Uncle Charlie, who makes the policing of rich women his own private affair.

The relationship of young Charlie to Uncle Charlie is sexually fraught and at times makes for somewhat disturbing viewing. The ring that Uncle Charlie gives to young Charlie marks the mental and emotional intimacy of that relationship, which Hitchcock himself described as "telepathic." Finally, note who owns the gaze in this film. It's the women, over and over again, who do the leering. This is unusual for Hitchcock and you sense that some retribution is in store. (It's not until about halfway through the film that we find out the nature of Uncle Charlie's crimes.)

For me, the film ends on an unusually optimistic note for Hitchcock. Jack, the detective who pursues Uncle Charlie to Santa Rosa, falls in love with young Charlie and she him. It is clear at the end that she has been able to confide some of her terrible knowledge about Uncle Charlie in her husband to be and that he doesn't hold her at all to blame for her past secrecy.

This film was one of Hitchcock's favorites of his own work. While it's not really a noir in terms of visual style, its themes of lost innocence and deep corruption may well have helped pave the way for the great noirs of the late forties.
posted by Sheydem-tants (9 comments total) 2 users marked this as a favorite
Thank you for a thoughtful post about my favorite Hitchcock movie. Maybe it's because of my age and when I was studying it (mid-late 90s) but I've always read this movie as the "strenuously against" link describes. (The fact that Hitchcock had issues with women doesn't mean that all his portrayals of women immediately have issues.)

I don't know if the story that Hitchcock rode the train with Thorton Wilder as Wilder wrote the train to military service is apocryphal or not, but I imagine it as real and it creates a whole second movie in my head.

Also if I ever heard anybody whistling this in real life, I'm not sure what I'd do but it would either involve searching their pockets for jewels or running away.
posted by MCMikeNamara at 2:44 PM on January 5, 2016 [1 favorite]

When I think of this film it's two things I remember. First is the sweetly bizarre (or bizarrely sweet?) relationship between Joe and Herb, bumbling through life cheerfully planning murder. The fact that ultimately it's of no consequence to the plot only makes it better.

And second it's the "The world's a hell, what does it matter what happens in it?" speech. This is 1943, a world wracked by unprecedented slaughter - millions are dying in the Holocaust and on the battlefields of the USSR and the Pacific - and yet this one man's very domestic sort of evil is still shocking.
posted by sobarel at 3:23 PM on January 5, 2016 [3 favorites]

This movie is extremely charming for a thriller. I loved Anna and Roger and the father's murder plans. I would watch the Shadow of a Doubt sitcom!

Of course this pleasant outer layer just serves to reinforce the pain of young Charlie's internal struggles. She makes a fairly dark decision (to let him escape) in order to preserve this outer layer the way it is, despite her railing against it in her first scene, in a way similar to how Uncle Charlie rails against it in the bar. These people have a charming live and meanwhile there's a war going on. They don't read the newspaper for the war news; they read it to get a peek at the lurid domestic crimes that could disturb their daily lives.
posted by tofu_crouton at 6:21 AM on January 6, 2016 [4 favorites]

"The world's a hell, what does it matter what happens in it?

Also sampled by industrial group Skinny Puppy at the end of their song "Smothered Hope" which led to one of my more classic "Oh that's where that's from!" when I first saw this movie in college.
posted by MCMikeNamara at 11:11 AM on January 6, 2016 [2 favorites]

I saw this last year and thought it was such a weird film. Very funny, less "misogynist" than I expect from Hitchcock, suuuuper beyond creepy. It felt kind of super-modern in how creepy it was. I liked it a lot, but I expected more from it... less noir, more ambiguity, I guess. I enjoyed it until the end when I felt kind of odd about it all. I think the modernity of the horror aspect led me to expect more of a postmodern hanging question instead of a neat ending. (Though it's not really very neat at all, in terms of the obvious psychological trauma-- kind of gothic in that way.)
posted by easter queen at 4:10 PM on January 6, 2016

They probably sampled half the movie over the course of various Puppy and side-project tracks. Outside of The Legend Of Hell House, it's possibly their biggest go-to for creepy cryptic dialogue snippets.
posted by brianrobot at 5:33 PM on January 6, 2016 [1 favorite]

Definitely my favorite Hitchcock, I love Cotten as a villain. I actually did my final project for my photography class last semester recreating twelve shots from this movie with my wife and myself filling in for Cotten and Wright. It was fun working with all those black and white shadows.
posted by octothorpe at 8:19 AM on January 7, 2016

This movie was practically made for film students to write essays on. The symbolism is so consistently applied and the shots are so well-framed and chosen. The script is really great. And the actors deliver it perfectly. My favourite single moment is during Uncle Charlie's monologue about stupid, fat women, when young Charlie says "but they're people" and he turns to look directly down the barrel of the camera and deadpans, "are they?"
posted by wabbittwax at 11:44 AM on January 7, 2016 [1 favorite]

I wonder if this is the first movie ever where someone shoots down a romantic overture by saying let's be "friends."

Hitchcock said this was his favorite movie he had made, but I can't see why — I don't think this is anywhere near his best. Teresa Wright was the only actor I liked enough to want to seek out other movies she's in. I found Joseph Cotten stiff, and most of the other characters one-dimensional.

But I do love this exchange near the end:

"He thought the world was a horrible place. He couldn't have been very happy, ever. He didn't trust people, seemed to hate them. Hated the whole world. You know, he said that people like us had no idea what the world was really like."

"Well, it's not quite as bad as that. But sometimes it needs a lot of watching. Seems to go crazy every now and then." 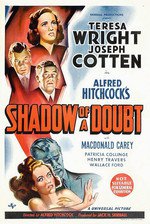