The season finale for the six-part season four that ran on Netflix. Slate reckons that you should watch season four, even if you abandoned The Killing earlier. The AV Club has a mostly-spoiler-free review of the season, and one full of spoilers. You can get brief episode recaps at the Wikipedia page. Buzzfeed talks with Tylor Ross who played Kyle (full spoilers). Vanity Fair found the season sentimental. As spoilers abound in any possible recap I can find, so the only recap possible above the fold is: It rains. Holder and Linden talk. Crime happens.
posted by viggorlijah (9 comments total) 1 user marked this as a favorite
Slate is WRONG. Season four is an abomination. I had a shoe in my hand, ready to break the screen if they kissed. But... they deserve each other. I used to like Holder but after that nastiness with his sister, I lost all sympathy.

There was just so much inconsistency and weirdness in this season. Off the top of my head:

- A big-city police department only assigns two detectives to what must have been an extremely high profile case (rich white people murdered in their own home)
- Kyle plays the piano after the strings were supposed to have been cut
- Linden just... lets him escape, because he was a tortured kid or whatever
- Linden pulls a gun on Holder outside the school they just raided with 20 other cops
- Holder happens to run into Kallie's mom and happens to have her earring in his pocket
- The dialogue was ATROCIOUS and often laughable
- There are no PoC in all of Seattle, certainly none who can speak
- There are only a handful of women in all of Seattle and only two of them can speak more than a couple of lines

I was really upset by this season because I'd become invested in Holden and especially Linden. Neither were ever perfect but it was so great to have a buddy-cop series where they looked like normal people and didn't have any sexual tension.I watch True Blood, so my standards are pretty low, but I had better expectations for The Killing.

If you want a better series (so far) with the same kind of dark tone, watch The Bridge (US version, although the Danish/Swedish version is excellent as well).
posted by desjardins at 10:25 AM on August 13, 2014 [3 favorites]

(although totally on the piano, that is funny)

The Killing is not realistic at all - it's like a modern fairytale where Linden is the lost Red Riding Hood trying to find her way home. It's as realistic as Twin Peaks in a way, a sort of dark magic realism, where the magic is pain and suffering and the slow uneasy slide of everything hopeful.

My husband and I are still arguing over Kyle being alive at the end, because I was and mostly am convinced that Linden helped him kill himself, but he says that she stayed with him until the other police came and that was how she helped.

The scene with Holden and his sister was key for me to the ending. Holden's season one twitchiness and the disdain the other cops had for him, his ease with Linden and the street kids - he was always comfortable around broken people, but he didn't seem broken. Then when he was drunk and his sister, the vicious familial back and forth, and his sister who'd survived worse and knew him better, calling him on it rather than papering over and not seeing the truth, that Holden is an addict, as Caroline was trying to - that made him not the rescuer to Linden, but a Hansel to her Gretel, both of them lost in the woods.
posted by viggorlijah at 6:20 PM on August 13, 2014 [1 favorite]

Also, how awesome was Gregg Henry as Carl Reddick? A few days after I watched The Killing, I caught him one of his Murder She Wrote episodes as a villainous showbiz producer, and he stole the show from the rest of the cast. And checking IMDB, OMG, he's Hollis Doyle on Scandal! I love him in both and it never clicked that he's the same actor.
posted by viggorlijah at 6:23 PM on August 13, 2014 [1 favorite]

I really enjoyed this series right up until the last 20 minutes or so.

It went from a good complicated buddy cop show to 'ah fuck' disgust. It felt almost as if the purpose of the last half season was to make sure nobody complained that the series had ended.
posted by srboisvert at 9:50 AM on August 14, 2014 [1 favorite]

My favorite Gregg Henry performance was as the Mayor in Slither. I squeed whenever he was on screen.
posted by miss-lapin at 12:46 PM on August 14, 2014

Well, there's one thing I will miss about this show, and that is Holder saying "Oh snap!" every five minutes.
posted by desjardins at 1:59 PM on August 14, 2014 [2 favorites]

Yikes. This show was really bad and really good at the same time. Like a guilty pleasure that you can't quite recommend to your friends. I remember hate watching the first two seasons and then forgetting about the show completely. The third and fourth seasons were a surprise for me, and I think that's why I enjoyed them so much. I watched the last 16 episodes in about a weeks time. So twisted, so weird, so dumb and so good. Of course there were plot problems and stupid dialogue and holder and linden just acting weird and out of character, but it was fun (and I'm a sucker for detective series in places where it's constantly raining). Really glad netflix was around to tie up the loose ends.
posted by pwally at 7:45 PM on August 18, 2014

I finally watched the last two episodes last night after taking a long break. Overall, I liked the season (though I agree with many of the criticisms voiced here), and I may be in the minority, but I was OK with the wrap-up. My biggest complaint was that seeing Billy Campbell's name in the opening credits led me to predict almost exactly how Linden's fate would play out. As soon as I saw it, I pictured him wheeling into the interrogation room and saving the day, though I thought it would've been more out of benevolence than self-interest.
posted by gimli at 7:15 AM on September 17, 2014 [1 favorite]

Very late (like...5 years) to the party here, but I'm two episodes away from watching all the way through. Amazing how Linden and Holder went from so likable (to me) to me disliking both of them intensely. At the end of season three I said to my husband, "I'm really going to miss Holder" but now I won't so thanks for that, Netflix. Also, I spent the entire series feeling so sorry for Jack and how little attention Linden paid to him. Like...it hurt.

Also very eye-rolly was how the show couldn't seem to have any killings that didn't involve beautiful teenage girls. First Rosie Larsen, then the hoard of young girls killed by Skinner, and then Kyle's family, who of course had a sexy teenager daughter who would pose naked in front of a window. I mean...of course!
posted by the webmistress at 12:06 PM on November 8, 2019 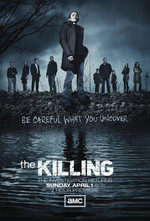