The Brakebills Students must endure a series of magical trials, while Julia finds a powerful new ally.
posted by aabbbiee (4 comments total) 1 user marked this as a favorite
Julia found a mediocre new ally anyway.
posted by Justinian at 5:15 PM on February 23, 2016 [5 favorites]

Oh yeah- this whole series totally isn't about the author's anxieties while attending an Ivy.
posted by TheWhiteSkull at 10:14 AM on February 24, 2016 [3 favorites]

Probably a dumb question, but does it seem like literally nobody in the series has a job (besides the Brakebills professors)?

Quentin's dad has cancer. I can't recall if he works.

Quentin, Kadi, Alice, Penny, Elliot et al seem to not be employed beyond their studies. Julia doesn't appear to have a job, nor her (ex?)boyfriend. I guess the hedge witches have some kind of front/fake jobs for the "safe house," maybe?

It stood out to me this episode, since we ran into Kadi's mom who is an actual adult and not part of the Brakebills 'Verse.

Literally everyone seems to be either a student or some kind of scam artist, so yeah, I'm with you, TheWhiteSkull.

I feel like I'm getting a taste of "long-con exhaustion" in that one trial leads to the next, nothing is clear/assured, everyone has secrets/isn't trustworthy, and people are constantly dying or being threatened with death. If there isn't some kind of pay-off coming for all this nonstop stress, I'll be sorely disappointed in this show. Because right now, all I see is people being taught to con/harm others through use of magic, but they're unable to do any real good in greater society at large by becoming magicians.

Is there any benefit to being magically inclined, other than becoming a student or turning into a crackhead itching for spells after you're banished from Brakebills?

If not, it seems like more of a curse. Here's hoping the next episode offers a more lighthearted look at magic's potential.
posted by Unicorn on the cob at 5:39 PM on February 24, 2016 [1 favorite]

Some people have jobs. Back in the 3rd episode, Emily Greenstreet "went full muggle" and "Fogg set her up with a job which is how you know they're hiding something big." In the books, there's more discussion on this. Magicians can have real world jobs where they use a bit of magic to make things work better, or simply hide the fact they do nothing productive. Or they can magically pull money from ATMs, make their hide-outs invisible, and live off of magic alone.

James, Julia and Q were on track to go to some grad school programs, which I believe what James is doing now. Julia was pretending to be in a program, and Q's dad thinks he's studying finance or something. Alice's Aunt Genji runs a magical retreat, and Quentin was talking with a magical doctor who specialized in feet "Broken bones, warts... I have some very interesting stuff for fungi of the toenail."

But this show (and the books) are all about how the real world is boring once you have magic, so it makes sense that they don't spend much time on the dull stuff like jobs.
posted by filthy light thief at 8:38 AM on March 4, 2016 [1 favorite] 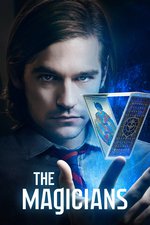