#1 NASCAR driver Ricky Bobby stays atop the heap thanks to a pact with his best friend and teammate, Cal Naughton, Jr. But when a French Formula One driver makes his way up the ladder, Ricky Bobby's talent and devotion are put to the test.


I listened to Adam McKay talking about The Big Short on The Treatment the other day, and learned he was trying to do something a little deeper than I had assumed with Talladega Nights, so I watched it this week, and I see he was.

For pure yucks-per-minute, I thought this movie was good-not-great. But watching along, most of the jokes are on capitalism, shallow patriotism and xenophobia. In a way, I wonder if it was Will Farrell's response to 9/11.

It's best/most subversive moment was immediately undermined by it's weakest: the Sasha Baron Cohen/Will Farrell kiss was just incredible and perfect. But it just had to end in Farrell's little, "That's enough" move, just so we're all clear, HE IS STRAIGHT.

On Faulkner.
posted by latkes (7 comments total) 5 users marked this as a favorite
Yes, stay for the post-credits scene, seldom shown on cable. Streaming services also discourage sitting through credits, in a "film or show is over now" way, which is a shame. Make an effort to find this, though! It's a little comedic masterpiece.
posted by raysmj at 7:54 AM on March 1, 2016

The dinner prayer scene might be the sharpest critique of prosperity gospel that I have ever seen. It's like something out of absurdist theater.
posted by maxsparber at 8:26 AM on March 1, 2016 [8 favorites]

I just saw this pop up on Netflix. When I first saw this I was blown away at how much it exceeded my expectations. My favorite were perhaps the smaller moments, like when John C Reilly calls up Farrell and Farrrell keeps forgetting he's mad. Just all around fun time.
posted by Carillon at 11:34 AM on March 1, 2016 [1 favorite]

My girlfriend loves that scene. She loves when Farrell asks him why he has the TV and the stereo on at the same time and Reilly shrugs and says "I like to party."
posted by maxsparber at 11:36 AM on March 1, 2016 [7 favorites]

Considering how much I enjoyed Walk Hard (based on Mallory Ortberg's proselytizing), I think I might need to give this a shot too.
posted by kmz at 1:54 PM on March 1, 2016

The dinner prayer scene might be the sharpest critique of prosperity gospel that I have ever seen. It's like something out of absurdist theater.

The argument over which Jesus to pray to reduces me to helpless laughter every single time.

I feel like Will Ferrell movies are like a baseball player who always swings for the fences. He misses a lot, but when he hits, he hits big.
posted by Pope Guilty at 7:54 PM on March 1, 2016 [6 favorites] 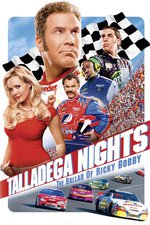