"[Elizabeth] Gilbert, the author of the phenomenally successful memoir Eat, Pray, Love (2006), returns to fiction with her first novel in 13 years, and what a novel it is! Taking her sweet time and digressing at will into areas ranging from botany to spiritualism to illustration, she tells the rich, highly satisfying story of scholar Alma Whittaker. Born to Henry Whittaker, “the richest man in Philadelphia,” who rose from his station as the son of a lowly gardener to an import tycoon, Alma has the benefit of wealth and books, spending hours learning Latin and Greek and studying the natural world. But her plain appearance and erudition seem to foretell a lonely life until she meets gifted artist Ambrose Pike. Their intense intellectual connection results in marriage, but Ambrose’s deep but unorthodox spiritual beliefs prevent them from truly connecting. Alma, who has never traveled out of Philadelphia, embarks on an odyssey that takes her from Tahiti to Holland, during which she learns much about the ways of the world and her own complicated nature. Gilbert, in supreme command of her material, effortlessly invokes the questing spirit of the nineteenth century, when amateur explorers, naturalists, and enthusiasts were making major contributions to progress. Beautifully written and imbued with a reverence for science and for learning, this is a must-read." - Booklist


This is the March book for the Historical Fiction Book Club. Remember that FanFare posts don't close and you can continue to discuss prior books (if it takes you a while to get around to them) for as long as you'd like!

NPR Review: "In her latest, and wonderful, novel, The Signature of All Things, she combines that roving intelligence with what we can now see are the themes of her career — foreign climes, societal shifts, the stubbornly elusive conundrum of family — in a delightful, overstuffed work that is one of the best of the year."

The Guardian: "Each passage of this sprawling novel is written with an astonishing eye for just the right amount of period or environmental detail. The character of Alma Whittaker is so believable, so deeply drawn and so likable for its complexity and open spirit, that it is impossible not to be engrossed by every twist and turn of her thoughts and imaginings. In fact, one of Gilbert's most impressive achievements is making Alma's journey a universal one, despite anchoring her protagonist's life in a different time and sending her to the furthest corners of the unexplored earth."

Slate interviews Gilbert: "I really did set out to try to write a 19th century novel with a more complete female experience. The only two endings that women ever got in those books—which are stupendous books with fantastic characters and extraordinary women—but at the end you either married Mr. Darcy or you were under the wheels of a train. I really wanted to write a book about a woman whose life is saved by her work, which I feel is not a story we see often, but as somebody whose life has been saved many, many times by my own work, it’s a really important story to me."

Believer Magazine interviews the author about her research process, inspiration from her ancestors, etc.
posted by Eyebrows McGee (6 comments total) 2 users marked this as a favorite
I read this rather a while ago and it's such a rich, complex novel it's hard to remember what specifics to highlight, but it was really engrossing and made me very happy; it was maybe my favorite book of that year. The sister's story was sad to me, and I want to reread with the idea in mind that the sisters stand in as types for religion and science as they separate in the 19th century.

I found it pleasingly amusing/cheeky that Ambrose's woo-woo touchy-feely spirituality that we despise on Alma's behalf in the book is much the same stuff that Gilbert herself was accused of after "Eat, Pray, Love." She has a very clear-eyed understand of what might be off-putting about it to other people.
posted by Eyebrows McGee at 3:01 PM on March 2, 2016

I really loved parts of this book a lot. I found the musings on science lovely, it made me want to go study mosses. The ending, though pat, was wonderful. I have a soft spot for Alfred Russell Wallace. All of the characters were incredibly vivid - I wanted to read the novels based on each of them, too.

I forgot to read this! I have it out of the library now and I've started. So far I love it, which is a surprise, because I hated 'Eat Pray Love' with a fiery passion. But Henry Whittaker is extremely compelling, and I've always loved this historical period.

Omai was indeed introduced into English society by Sir Joseph Banks after being brought out of Tahiti by Captain Cook.

Henry's cinchona empire is so successful because cinchona is the source of quinine (etymology), still a good treatment for malaria.

I strongly suspect that Henry's globe-trotting botanical adventures were inspired by 'The Orchid Thief', which contains a compelling history of early orchid (and other botanical) collection. Gotta love wikipedia: List of gardener-botanist explorers of the Enlightenment.
posted by bq at 8:52 AM on March 5, 2016 [1 favorite]

I'm just finishing this book and stumbled upon this group via MetaTalk! I'll definitely be back in day or two with Comments.
posted by bluebelle at 2:26 PM on March 6, 2016

I adopted this book as my bedtime reading. I'm only reading a dozen or so pages a night but I'm really enjoying it. I'm just at the part where Retta is introduced. it is one of those books that you don't want to end.
posted by night_train at 3:51 PM on April 15, 2016 [1 favorite]

I've just finished reading this. I would have liked to know more about Prudence. I was hoping she'd send Alma a long letter so we could learn more about her life. The ending was a little pat and Alma's failure to resolve her difficulties with altruism and evolution leads me to believe that the author has an issue with evolution. That is my only very small criticism. This is not the type of book I'd normally read but I enjoyed every bit it and I'm going to miss it.
posted by night_train at 9:30 AM on May 3, 2016 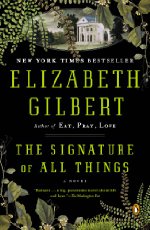