Two hit men pick up ex-gangster Willie to escort him back to Paris to face his betrayed colleagues. The road trip suffers from complications.


outofthegutteronline: Stephen Frears directs from Peter Prince's dynamite screenplay. Terence Stamp plays Willie Parker, a British gangster turned government snitch, hiding out in the Spanish countryside for the last ten years. With his old boss out of jail, Parker is nabbed by a hitman and his sidekick - Braddock (John Hurt) and Myron (Tim Roth), respectively - who are tasked with driving Parker cross country and into France, where he will face his mob fate.

On the way, Parker exhibits an indifferent, cheery demeanor, welcoming the ride. Myron is the newbie, who talks too much and is quick to boil his own blood. Braddock is the veteran assassin - few words and even fewer expressions.

NYTimes: Why the mob wouldn't be satisfied with a simple little assassination in the Spanish countryside is never credible. But then this is not a movie about the revenge murder itself. It's about all the things that can go wrong as Braddock and his assistant, Myron (Tim Roth), a character Elisha Cook Jr. once might have played, attempt to drive Willie the length of Spain to the French border in a stolen Mercedes.

WaPo: The film is like "Das Boot" in a car, as the four cross the dusty Spanish landscape, confined in superb dramatic fashion to work out their various circumstances.

LATimes: We think we know the equation instantly: How long will it take one bright, unarmed criminal to outwit two smart-to-stupid ones? Right. And not right. Frears, with novelist-screenwriter Peter Prince, turns it into something more: unmatched suspense with the inexorability of myth, a beautiful (and bloody) rumination upon living and dying.

Criminal Element: From the moment Braddock and Myron grab him, Willie Parker displays no anxiety whatsoever about his imminent death, and he's the calmest, most agreeable prisoner possible. He chats about all manner of things with them—why he grassed, his decade in Spain, his take on life in general—and he obligingly serves as translator between the two of them and the Spanish woman. Through everything that happens, though certain he will die when they reach Paris, he displays a Zen-like tranquility that neither of his captors understands. He's clearly not a man who wants to die—he enjoys books and conversation and the majesty of waterfalls too much for that—but the prospect of dying is neither here nor there to him. He seems to be the embodiment of the Hemingway mantra “grace under pressure,” and indeed, there's no question that Ernest Hemingway's “The Killers” is the story that most comes to mind as a literary influence.

Trailer
posted by MoonOrb (3 comments total)
A few days ago I did a FanFare post on The Last Detail, and I had not thought of these two movies as being similar despite sharing the basic "road trip with a condemned man" plot. But now I'd like to watch them back-to-back and have a think about the way the various characters deal with the impending certainty of the fates of the characters played by Terence Stamp and Randy Quaid, respectively.
posted by MoonOrb at 1:27 PM on April 4, 2016

One thing that's always fascinated me about this is Stamp's character's sudden shift from stoic acceptance to utter panic. I buy it completely, but what causes it? Is he dropping the mask of calm he's been wearing the entire time? Is it just his proximity to death that brings it on? Are we even supposed to have a solid answer?
posted by ODiV at 2:01 PM on April 4, 2016

I don't think there is supposed to be a solid answer about when Willie backslides. I think he did believe it, or he was just in a dream, or he just thought when he got to Paris he could talk his way out of it. Even on the witness stand snitching away he had a reckless carefree foolishness.

This movie reminded me of Jarmusch a little bit, but maybe that's just killers and Spain from Limits of Control. Or maybe it's the sort of laconic ambling through the plot and the kind of PG hoakiness of the main characters.

This is a good role for Roth, doing Tim Roth things.

I kept thinking that Hurt and Stamp would be more normally cast in each others roles. I think Stamp did a really good job I didn't know he had this part of his range.
posted by fleacircus at 11:07 PM on September 6, 2021 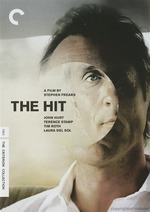