After leaving prison, master thief Corey crosses paths with a notorious escapee and an alcoholic former policeman. The trio proceed to plot an elaborate heist.


AV Club: In Le Cercle Rouge, the most important question is "how": How do men conduct themselves? How professionally do they do their work? How will they be judged under the honor code? The film's heroes and antiheroes all start on a level playing field, regardless of their past or future crimes, and the ones who don't stay true to their word are later condemned as rats. In this rigorously defined moral universe, several of Melville's archetypal loners converge for a jewelry heist, functioning as strangers bound only by the principle of honor among thieves.

Roger Ebert: The heist itself is performed with the exactness we expect of a movie heist. We are a little startled to realize it is not the point of the film. In most heist movies, the screenplay cannot think beyond the heist, is satisfied merely to deliver it. "Le Cercle Rouge" assumes that the crooks will be skillful at the heist, because they are good workmen. The movie is not about their jobs but about their natures.

Melville fought for the French Resistance during the war. Manohla Dargis of the Los Angeles Times, in a review of uncanny and poetic perception, writes: "It may sound far-fetched, but I wonder if his obsessive return to the same themes didn't have something to do with a desire to restore France's own lost honor." The heroes of his films may win or lose, may be crooks or cops, but they are not rats.

Senses of Cinema: The sadness in Melville comes, in part, from his objectivity. His camera is resigned to its inability to transform a character’s fate. Mattei has told Santi that the latter must inform on the criminals, even if it’s “against [his] nature”. When the viewer discovers that despite much protest he has, one questions whether Santi has betrayed his principles, or whether being an informer was always in his character. Or is it man’s nature to be disloyal to himself? Perhaps this is one meaning of the film’s repeated line, “All men are guilty…. We all change – for the worse.” Style and professionalism cannot keep this knowledge obscured forever.

Slant: Happenstance is indeed a large key to the film’s success in that it ultimately causes the downfall of Vogel, Corey, and their cohort, Jansen (Yves Montand, a hypnotic presence as always), an ex-cop and expert marksmen in the throes of detox after a tumultuous love affair with the bottle. A slip of the tongue from their fence; a ploy gone wrong at the police station; a resilient security guard who awakes early from a blow to the head: This confluence of events that proceeds after the show-stopping 20-minute-plus heist sequence would seem preposterous under nearly any other director, but Melville orchestrates these moments with an understated B-movie classicism. Having changed his name in honor of the Moby Dick author, Melville was unrivaled in his ability to frame minor details in such a way that they transcended their seeming inconsequentiality and became visual alarms as negligible as police sirens.

Trailer
posted by MoonOrb (3 comments total) 5 users marked this as a favorite
Man... Alain Delon in that fucking trenchcoat and mustache, beating guys up in a billiards hall.

The beauty (well, as it were) of this film was the pacing of it and then way it insists you pay attention to the characters, not just what they do, but why they do what they do. It makes for this very particular tension. There's a good dollop of this same strategy at play in "Heat" (Michael Mann). Where the movie is not so much about the black and white of good guy bad guy but moral guy, immoral guy.

I saw this first in the early 90's, then again a couple months ago (via Hulu). And was struck all over again with how intelligent the film is. There's something so seductive about an exciting story being told in a calm, almost abstracted way. The juxtaposition, especially since the heist -is- so suspenseful.
posted by From Bklyn at 2:03 AM on April 24, 2016

Film's being released in a 4K restoration starting next week.

TIL that Melville slapped the pornstache on Delon for this movie because he wanted him to be less pretty!
posted by praemunire at 2:02 PM on June 22, 2021 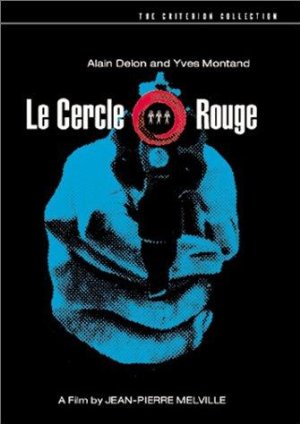