An all guts, no glory San Francisco cop becomes determined to find the underworld kingpin that killed the witness in his protection.


Bullitt is a 1968 American dramatic thriller film directed by Peter Yates and produced by Philip D'Antoni. It stars Steve McQueen, Robert Vaughn and Jacqueline Bisset. The screenplay by Alan R. Trustman and Harry Kleiner was based on the 1963 novel, Mute Witness, by Robert L. Fish, writing under the pseudonym Robert L. Pike. Lalo Schifrin wrote the original jazz-inspired score, arranged for brass and percussion. Robert Duvall has a small part as a cab driver who provides information to McQueen.

• After losing control of his car and smashing into a parked vehicle, Steve McQueen's then-wife Neile begged Peter Yates to use stuntmen. So when McQueen reported for duty to find stuntman Bud Ekins sitting in his car, dressed as McQueen, he was furious.

• Bud Ekins who drives the Mustang also did the motorcycle jump for Steve McQueen in The Great Escape (1963).

• Two Mustangs and two Dodge Chargers were used for the famous chase scene. Both Mustangs were owned by the Ford Motor Company and part of a promotional loan agreement with Warner Brothers. The cars were modified for the high-speed chase by veteran auto racer Max Balchowsky. Stunt coordinator Carey Loftin got Bud Ekins to drive the Mustang for the bulk of the stunts. Both of the Dodges were junked after the filming, as was one of the Mustangs. The other less banged-up Mustang was purchased by a WB employee after all production and post-production was completed. The car ended up in New Jersey a few years later, where Steve McQueen attempted to buy it. The owner refused to sell, and the car now sits in a barn and has not been driven in many years.

• The total time of the scene is 10 minutes and 53 seconds, beginning in the Fisherman's Wharf area of San Francisco, at Columbus and Chestnut (although Bullitt first notices the hitmen following his car while driving west on Army, now Cesar Chavez, just after passing under Highway 101), followed by Midtown shooting on Hyde and Laguna Streets, with shots of Coit Tower and locations around and on Filbert and University Streets. The scene ends outside the city at the Guadalupe Canyon Parkway in Brisbane.[14] The route is geographically impossible if it is assumed to take place in real time

• Pay close attention during the car chase at Steve McQueen's reflection in the mirror. If you look at his mouth, you'll see that he's indulging in popular habit among race car drivers: He's chewing gum.

• The director called for speeds of about 75-80 mph, but the cars (including the ones containing the cameras) reached speeds of over 110 mph. Filming of the chase scene took three weeks, resulting in 9 minutes and 42 seconds of footage. They were denied permission to film on the Golden Gate Bridge.

• Bullitt is notable for its extensive use of actual locations rather than studio sets, and its attention to procedural detail, from police evidence processing to emergency room procedures. Director Yates' use of the new lightweight Arriflex cameras allowed for greater flexibility in location shooting.

• The famous car chase was later spoofed in the Clint Eastwood film, The Dead Pool, in the Futurama episode, "Bendin' in the Wind," and in the Archer season six episode, "The Kanes." Bullitt producer Philip D'Antoni went on to film two more car chases, for The French Connection and The Seven-Ups, both set and shot in New York City.

• Several items of clothing worn by Steve McQueen received a boost in popularity thanks to the film: desert boots, a trench coat, a blue turtleneck sweater and, most famously, a brown tweed jacket with elbow patches.

• The cops that Steve McQueen rode around with wanted to test his mettle so they took him to a morgue. They had to admit that the star was pretty cool when he showed up, eating an apple.

• Steve McQueen based his character on San Francisco Homicide Inspector Dave Toschi, made famous for his work on the Zodiac killings. McQueen had a copy made of Toschi's custom fast-draw shoulder holster. Toschi later became famous, along with Inspector Bill Armstrong, as the lead San Francisco investigators of the Zodiac Killer murders that began shortly after the release of Bullitt. Toschi is played by Mark Ruffalo in the film Zodiac, in which Paul Avery (Robert Downey, Jr.) mentions that "McQueen got the idea for the holster from Toschi"

Fun fact: during the famous car chase, McQueen upshifts gears 16 times without downshifting once.
posted by DirtyOldTown at 5:25 AM on May 2, 2016 [1 favorite]

Disappointed that there's no info on the modifications that allowed the one car to lose 6 hubcaps. :(
posted by LionIndex at 7:58 AM on May 2, 2016 [4 favorites]

Several items of clothing worn by Steve McQueen received a boost in popularity thanks to the film...

After watching a few classic films that left me merely whelmed, I have to say that this one definitely lived up to its reputation.
posted by pmurray63 at 10:23 AM on May 4, 2016

A scene almost as famous for its continuity errors as for what it brings to the film. While you're counting gearshifts and hubcaps, don't forget to count the green VWs. 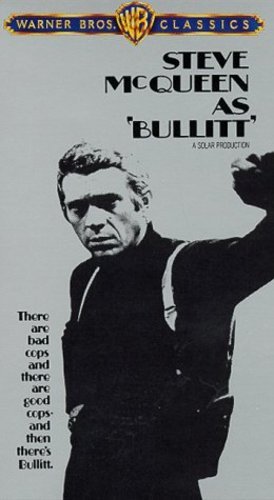