A man refuses to conform to life in a rural prison.


Slant: Reconstituting the solitary antihero of the chain-gang picture for the late ‘60s, Cool Hand Luke gave Paul Newman his third iconic role of the decade (following The Hustler and Hud) and a figure he embodies as more Redeemer than movie star. Evolving from laconic, detached enigma—the character is a decorated war hero busted for drunkenly decapitating small-town parking meters—to a doomed individualist fighting the Man’s oppression on behalf of his fellow sinners, Newman’s beauty and post-Method charisma is in the service of a tailor-made scenario (adapted by Donn Pearce from his autobiographical novel, with Frank R. Pierson). Forged into a symbol by his captors’ cruelty, failed escape attempts, and the eventual idolatry of his comrades, Luke is the road-gang prisoner as incarcerated messiah. No wonder he converts bunkhouse alpha-dog Dragline (burly George Kennedy, in an Oscar-winning performance) from a foe who beats Luke bloody in a Pyrrhic grudge fight to a worshipful ally who enthuses over him as “my baby” and “you wild, beautiful thing.”

Roger Ebert (2008): It is a great film. On that most of us can agree. But such a film could not possibly be made in more recent decades, not one starring Brad Pitt or Tom Cruise or other actors comparable to Paul Newman's stature. It is simply too painful. I can imagine a voice at a studio pitch meeting: "Nobody wants to see that." Much was made by many critics, myself included, of Newman's "anti-hero" stature in "Luke" and other films he made around the same time: "The Hustler," "Hud," even "Butch Cassidy and the Sundance Kid." I'm no longer sure he's an anti-hero in "Cool Hand Luke." I think he's more of a willing martyr, a man so obsessed with the wrongness of the world that he invites death to prove himself correct. Louis Armstrong once said, "There are some folks that, if they don't know, you can't tell 'em." The brutal guards who rule the work camp where Luke is a prisoner demonstrate time and again that if he escapes, he will be captured and punished to within an inch of his life. Since he knows that, is he is seeking punishment?

NYTimes: He is a curiously calculating loner, a terse and sarcastic misanthrope who treats his jailors with taciturn defiance and his fellow prisoners with cool contempt—at the start. He takes with bland endurance the kicks and proddings and verbal insults the skulking guards rain on him, and he smiles when his fellows ridicule him and haze him unmercifully.

But he has pride and the dignity of detachment grown out of some boyhood hurt, perhaps. He isn't a coward or weakling. So when things finally come to the point that he must fight the top-dog prisoner to a showdown, he does so gamely, ferociously, and defiantly until he drops.

That is the turning point for him, because from there on the top-dog takes him in tow, makes him his boasted companion, and, recognizing his superior skill and wit, backs him in poker games and, most impressively, in a refreshingly funny wager that he can eat fifty hard-boiled eggs.

This elevation does it. Now he is Cool Hand Luke, the idol of the sychophantic prisoners and the growing concern of the guards. He assumes bravura postures to demonstrate his contempt. And because it is expected of him, when he receives word that his mother has died he makes a break for freedom. He almost gets away, but is caught and returned.

The inevitable commitment to this pattern—other breaks, other returns, other and crueler beatings and tortures until his pride and will are destroyed—leads to the sad and grisly finish for this congenital fugitive—a fugitive not only from the chain gang, but also from society, and, indeed, from life.

What we got here is a failure to communicate

I can eat fifty eggs
posted by MoonOrb (4 comments total) 3 users marked this as a favorite
I first watched this when I was thirteen, flipping around TV channels on a rainy Sunday afternoon with my childhood best friend. I'd like to say we started watching after seeing a particularly striking shot of a guard's sunglasses reflecting the milieu, but I have to admit, we stopped on the channel because of the car wash scene. So hormones got us there, but Newman and Kennedy (especially Kennedy, who we only knew from The Naked Gun movies) kept us watching.

I've rewatched it a few times since then, with a more analytical eye and more knowledge of allusions and life in general, but I'll never be able to re-experience the magic of flipping past sports, cartoons and infomercials to stumble upon a truly great piece of art.
posted by infinitewindow at 11:09 AM on May 7, 2016 [1 favorite]

Also from Ebert's review: "Today, the egg-eating scene strikes me as all but unwatchable." So funny how a movie that's considered a "classic", suddenly isn't. But my father loved this movie, and the failure to communicate line.
posted by Melismata at 1:51 PM on May 12, 2016

I can't think of another movie with as many iconic moments in it. My favorite will always be the chain gang/car wash scene, with "Putting them on here, boss... Taking them off here, boss."
posted by Dip Flash at 5:58 AM on May 16, 2016

I just watched this last night, for the first time.

So many faces to recognize! Dennis Hopper was so pretty. It was funny to see Harry Dean Stanton, Trapper John and Ma ma ma ma Mitchell. Newman is so fucking handsome, but holy shit Kennedy really puts in some work.

Not exactly a light touch in 1967. The God stuff made me sigh (like his crucifixion pose after the egg eating). The "hero or antihero??" line seems kind of pointless. So much of the era is about a kind of amoral deconstructed individualism. Which can be heroic, but also is not. They loved the smirking blue-collar rascal back then, Nicholson in Five Easy Pieces or Cuckoo's Nest, hell even Han Solo. Maybe a teeny bit Mifune in Seven Samurai. The jerk with the charming smile and maybe the heart of gold.. or maybe not. Later it metastasizes into just straight up asshole worship of the 80s... For me like the turning point on that character was Heathers.

Or maybe another point would be a movie like 68's Thomas Crowne Affair which is like, "You know what's good in life? Being an incredibly rich dude, that's what."

Back to this movie. Pride, bravery, hard work, what's the point of having any of those manly / individualist virtues, when you're a prisoner? Why even bother, when your brothers are sinners and your commanders are cruel enemies. Everything's inverted, but Luke isn't free on the outside either. Why can't Luke keep it together? The movie doesn't say, and he's past working it out even when the movie opens. His course is set, there's no temptations to return to the path of good. I'd hate if that was in the movie.

I was watching it with my SO, who has seen it before. About 2/3rds through, after joking about how I was sure things were headed towards a happy ending, I said, "Okay what kind of ending are we looking at? Cuckoo's Nest? Gallipoli? Yeah.. he's going to get shot by Westworld Mad Max and die smiling." I was sorta close!
posted by fleacircus at 10:20 AM on September 22, 2017 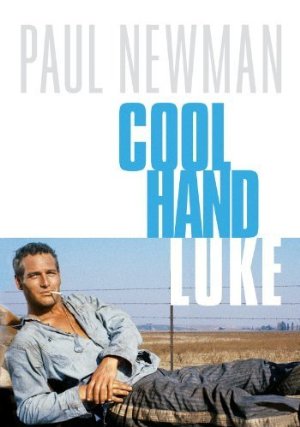