Bojack hits rock bottom. Mr. Peanutbutter and Todd save the day. Princess Carolyn finds a new calling.
posted by Pendragon (10 comments total) 4 users marked this as a favorite
If you think of Bojack Horseman as The Adventures of Mr. Peanutbutter, like I do, this season was a really uplifting journey that wrapped up on a high note.
posted by Parasite Unseen at 11:33 AM on August 3, 2016 [19 favorites]

The Lynn death caught me by surprise, though, I did find Bojack's freak out on the set of Effing Around a little over dramatic. His character makes me wonder if he's ever truly been happy or if his life has been one where he is constantly convincing himself he's happy through the use of drugs, alcohol, or other people.

I'm already stressing out over Mr. Peanutbutter and Diane in Season 4, as their relationship and his run for California governor will definitely be their major storylines. Toss in Bojack joining a herd of 'wild' horses on the plains before learning he has a daughter, we know his storyline for next season, too.

I don't know about Stilton and Princess Carolyn. He seems to not take her ambition seriously -- telling her she basically doesn't have to work anymore -- and I can't imagine she will be comfortable with that for long.

I was also caught by surprise by Sarah Lynn. And I'm sad that means no more Kristen Schaal.

I don't think Bojack has ever truly been happy. Perhaps in fleeting moments as a kid, before that was beat out of him and he numbed any other possibility with drugs/sex.
posted by fiercecupcake at 1:05 PM on August 5, 2016 [2 favorites]

I love this show so much and I don't have anyone in real life to discuss it with, so I'm grateful for the Fanfare threads. It's so hard to explain to people -- well, yes, it's a cartoon about a talking horse-man. But it's also one of the most emotionally draining things I've watched and one of the best portrayals of people dealing with/not dealing with various levels of brokenness.
posted by fiercecupcake at 1:06 PM on August 5, 2016 [9 favorites]

Are you kidding? She has another stunning run to do on [enter a famous television drama] yet to tackle. She'll arise from the ashes, with or without giant paper mache Todd Head.

I don't know about Stilton and Princess Carolyn. He seems to not take her ambition seriously -- telling her she basically doesn't have to work anymore -- and I can't imagine she will be comfortable with that for long.

I saw Stilton as a counterbalance to her drive to make her life one overwhelmed and dedicated to business. If they don't end up together, it's because Princess Carolyn has decided to forsake a romantic future of any sort, which would be sad given her storyline this season. It's not that he doesn't want her to work, he just realizes, from my interpretation (all interpretations valid!) that if she dives back in, she won't spare any time for her personal life (and by extension, their relationship).
posted by Atreides at 8:01 AM on August 8, 2016

Overall, I really liked this season! I did get the distinct impression that season 4 was greenlit at the same time as season 3, which is why this season's ending feels a whooooole lot less "potential seasonal finale" than the previous two did. I also can't be the only one who initially misinterpreted the phone call for BoJack at the end as having been from Penny because of the "college dorm" context and the stuff from the previous episode, right?

I really like this show, but at the same time I don't really know how much longer it should run. The fact that each season is structured as being effectively a 12-chapter novel in the format of an animated TV show does certainly help out a lot in terms of keeping the show feeling focused, and it remains just staggeringly hilarious, and they keep doing clever stuff with flashbacks and the like… I don't know! I am conflicted because I think it's really great, and I kind of hope they cut it off at its peak like Arrested Development* instead of letting it sort of fade into mediocrity, like the Simpsons.

That said, I never would have expected the amazing silent episode this season at the end of last year, so I suspect that they probably know where they're going.

I love where the characters seem to be going in terms of their development. A government job seems like an ideal storyline for Mister Peanutbutter, and Diane's storyline has been fairly interesting too (especially, as one commenter astutely noted, her tendency to stay aloof from actually engaging with the world due to know-better syndrome, as best demonstrated by the fact that she'd clearly never actually considered listening to "Brrap Brrap Pew Pew" before deciding it was offensive for reasons X, Y, and Z).

It does seem like a main theme this season has been, to no small extent, work-life balance, and I see that only becoming more significant next year. Being a Snake People myself, it is a theme that I figure most of the target audience is pretty intimately familiar with.

As someone who has struggled with suicidal thoughts in my past and is still fighting a life-long battle with depression, the way BoJack accelerated and closed his eyes - Holy shit, that resonated, down to the choice of where and when to do it - on an empty highway... not because you necessarily want to end it all right there, but because you want to see if you are even capable of feeling anything at all at at time that you KNOW you should be feeling SOMETHING -- and flirting with your own self destruction in more severe and direct ways. I have done this exact thing in my past, on more than one occasion - most memorably, shortly after my best friends funeral, on a drive home from Illinois to Kentucky. So yeah, just a TINY bit close to home on this episode.

I had never told anyone that I had done this until relatively recently, because at the time it wasn't a big deal at all, not even worth remembering. That sort of casual approach to just throwing it all away is one of the most jarring things to think back on, and it was captured perfectly here. I've seriously never seen anything channel serious depression quite like this show, but that particular moment - that was absolutely chilling to me in how it was written and presented.
posted by MysticMCJ at 12:12 AM on August 13, 2016 [6 favorites]

I guess someone should probably link to Nina Simone's version of "Stars" -- live in Montreaux, 1976, utilized perfectly in this episode, but worth hearing all the way through just to see how perfectly ... and to another live version from a couple years earlier by its author, 23-year-old Janis Ian, which is super long and, well, pretty boring by comparison, but mindblowing in that way that Janis Ian always was back then. There aren't a lot of people I'd call a genius, but anyone who can write a song like that in their early twenties definitely qualifies. And she wrote dozens of them then, and dozens more even earlier. And delivered them like that.

As for "we all have a story," Janis Ian has some doozies about Nina Simone that make BoJack Horseman look like a cartoon horse by comparison. But that's for a different thread.
posted by Sys Rq at 5:59 PM on September 11, 2017 [1 favorite]

This show... yeah I'm a little late to the bandwagon - I always found the graphics annoying, the premise, pffff, how can that be anything other than poop... and I fucking hate Hollywood/California/aesthetic glorification because I don't understand it and it just feels alienating... And now I see, well, ok fine I was totally wrong.

This is really a crazy good show. BoJack's depression is a little on the nose - by which I guess I mean it's eminently recognizable. And the music at the beginning credits is also - I wonder about this as a 'live' action show and can't see any real reason for it.

And dammit Sarah Lynn's death was too much/ exactly right. Horrible. But perfectly just so - exactly how it should be portrayed. Just like ...life

The animations do kind of just get out of the way - the voice-acting is really exceptional. I keep trying to connect Bojack with G.O.B. and Dane (? 30Rock) and I'm just impressed. Over and over.

It's curious that this isn't novel, and at the same time I'm glad it isn't because it wouldn't reach enough people. I suppose this is (maybe?) the novel Brett Easton Ellis wanted to write.
posted by From Bklyn at 4:47 AM on May 26, 2020 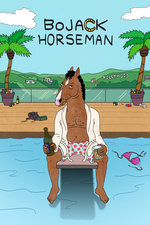