The story of two soldiers from opposite sides of a never ending galactic war trying to raise a child together. (Issues 1-6)


Short summary to jog memories of what’s in this volume:

Issue 1: Alana gives birth to Pico Beatrice Hazel on Cleave, but the new parents are soon interrupted by some Landfall Coalition forces, who are then interrupted by some Wreath forces, and both squads manage to take each other out and leave the new family intact. The grease monkey that sold them out gives Alana and Marko a way out, and also a map. Prince Robot IV is trying for a baby when he is interrupted, ahem, by Special Agent Gale, who tells him that his new mission is to find our main characters for the Landfall Coalition forces. Meanwhile, The Will and lying cat pass their job interview and are hired by Wreath to do the same. Alana and Marko argue over whether or not they should trust a super sketchy map given to them by a guy who already betrayed them, but then they run into evidence that the map isn’t completely fiction. Also a battle involving a giant turtle and a spaceship.

A lot. That’s what happened in issue 1. I didn’t cover all of the general backstory and worldbuilding that happened.

Issue 2: The Will calls his agent, hears The Stalk is also after the family, and attempts to nope out of this story and go to Sextillion instead. Prince Robot IV interviews a few people on Cleave and find out that Alana was a reader. Alana and Marko have to deal with a newborn, giant grasping vines, exhaustion, and The Stalk, who is frightened away by some teenage ghosts.

Issue 3: Alana meets Izabel, who is a typical teenager who wants to leave her boring planet and find something more exciting out there. Unlike a typical teenager she has to bind herself to someone born on Cleave to leave home. She wants to be able to bind to Hazel in exchange for saving Marko, but Alana isn’t having it. The Stalk tries to bring The Will into the story, but he’s still not having it. Prince Robot IV interviews a Wreath detainee about a romance novel. Some backstory and Izabel’s babysitting skills convince Alana to allow Izabel to bond with Hazel. Delirious, Marko expresses his love for his bride. . . Gwendolyn.

Issue 4: The Will arrives on Sextillion, where he finds a slave girl, which is one exploitation too far for him so he squashes the pimp's head like a melon. Magic cures Marko, so Alana questions him about Gwendolyn. A Landfall ship finds Marko and Alana, so Marko draws his sword.

Issue 5: Prince Robot IV finds out his wife is pregnant while he is on the toilet. Marko battle rages on the Landfall Coalition forces until Alana stops him, and they steal a Landfall ship. The Will finds out what sort of safeguards are placed on the slave girl, and now has to come up with a lot of money quickly. He calls The Stalk to try to partner up on the job, who is then shot by Landfall forces. Hazel smiles, or maybe passes gas.

Issue 6: Alana, Marko, and Izabel reach the rocket ship forest, but have to make a sacrifice before they can enter. Marko breaks his sword. The Will finds out Prince Robot IV killed The Stalk and vows to get revenge. Alana and Prince Robot IV independently decide to go to Quietus to see what this romance author guy is about. Marko’s parents show up.
posted by dinty_moore (11 comments total) 10 users marked this as a favorite
This is part of the comic book club. We’ll be posting one trade volume (or six issues) of Saga every two weeks until we’re caught up with what’s out. What we’re reading next is still up in the air, but you can post your suggestions here.

Please try not to post any spoilers for anything happening after this volume - we'll get to it eventually. If you're reading from an omnibus, this post's discussion ends on the full page where Marko reveals the rocketship intruders are his parents.
posted by dinty_moore at 6:55 AM on April 3, 2017

I recommend Saga to many of my non-comics reading friends who express even the most casual interest in comics, and when I do, I usually re-read this first volume on my own.

Having bought and read every issue on the day of its release, it's always a shock to remember how dazzling the first few issues felt. Not that the book has suffered since then, but it's been so consistently, casually excellent that I almost take it for granted.

ANYWAY, BKV is BKV, and is always manages to spin a consistently compelling story full of great characters. And while everyone loves Fiona Staples, and she certainly has a room full of awards to show for it, I believe that in a few decades she could be regarded as a visionary in the same class as Moebius or Jack Kirby. It's a genuine privilege to watch the development of such a talented artist, this early in her career.
posted by incomple at 7:28 AM on April 3, 2017 [2 favorites]

So much happens in the first few issues, too - if you asked me what happened in the first volume, I'd probably just mention the first issue. Which, admittedly, was an oversized issue, but in an age of decompressed storytelling in comics, it still packs in a lot of story.

The other thing is that it never feels rushed - there's a lot of action, but there's also plenty of room to give the characters room to breathe and show their personality. Alana and Marko are dumb idiot first time parents, and it shows. Izabel is such a teenager. Lying Cat is the best ever (I love the little 'lying' as they slump away from Sextillion).

Also, the character designs. The character concepts are also good, but the way they appear on the page is amazing. Little things like the variety of horns available for those from Wreath make for an entertaining reread experience, because there's just so much to notice. Read it once for the plot, again for noticing all of the background characters.

I'd also forgotten exactly how much sex and shitting was in this first volume - I'd remembered there was a decent amount (Sextillion and the fact that giving birth feels like shitting), but forgot quite how much. The first time I read Saga, it while I was on the elliptical at the Y. Not my best choice in exercise reading. . . .
posted by dinty_moore at 7:52 AM on April 3, 2017

Saga is the third comic series I've read (The Walking Dead and Matt Fraction's Hawkeye being the first two) and the first I got my comic-nerd friend to start reading. It's the only one that I actually buy physical copies of - largely for Fiona Staples' art.

And OMG I could use a Lying Cat.

But really, it's the details that keep me coming back. Like referring to the "grease monkey" that let them use the garage where Hazel was born... then a few pages later, it turns out to be a monkey. The world that they've built is deep... and I can't tell if they actually built it that deep or if it's just built so that you assume there's more depth to it.

ut in an age of decompressed storytelling in comics,

I was so glad they put the (stupidly) infamous breastfeeding image as the cover of the trade.
posted by phearlez at 7:09 PM on April 3, 2017

I read this trade shortly after my own daughter was born. I've been buying single issues at my LCS every since. The whole series is a miracle - it feels so great, so deep, so revolutionary in so many ways but at the same time still feels like such a private secret. I'll happily do a reread with this fanfare group, I've been meaning to dust them off. Whoever recced it to me (might have been mefi, actually) compared it to Star Wars and I think it's apt - not in terms of story or characterization but in having built a universe you feel you could play around in for many lifetimes and keep finding interesting planets and things to do.

I never really got into comics when I was younger, but someone (probably saw it here on MeFi) recommended this a couple years ago and I was hooked. Love this series. And each time a new trade comes out I reread the ones before. Have gotten behind recently and just picked up Vol. 5 and can't wait to do my reread.
posted by snwod at 11:28 AM on April 4, 2017 [1 favorite]

Well, for those who want to follow along, you can join the club page, which also has the posting schedule - every other week on Monday (next posting is April 17th)
posted by dinty_moore at 6:33 AM on April 6, 2017 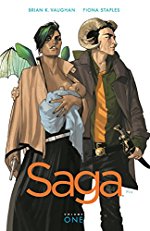