After escaping on a rocketship, Hazel meets the grandparents and we meet Gwendolyn. (Issues 7 - 12)


A short summary to jog your memory of what happened:

Issue 7 starts off with a flashback to Marko’s childhood, where Marko’s parents, Klara and Barr, decided to take little Marko to the most accurate historical battle reinactment ever. In the present, Marko’s parents meet Alana. Marko goes to fetch Izabel off a nearby planet, and Klara goes after him. Barr takes an interest in Hazel, so Alana has the ship tie him up. Klara and Marko meet the giant creature that make this issue NSFW. Barr reveals he has less than a month to live to get out of a bind, puts Alana to sleep and takes Hazel.

Issue 8 starts off with a flashback to when Alana and Marko met. It was not love at first sight. Marko and Klara bind the giant and find out that they’ve stumbled on something bigger - a planet-sized egg that is nearly ready to hatch. Alana wakes up from her nap, and Barr makes her a new outfit. They bond. The Will’s agent meets Gwendolyn (and so do we!).

Issue 9 starts off with a dream sequence, before The Will meets Gwendolyn. She’s unimpressed, but wants his help tracking down Marko. She calls up Mama Sun and uses the power of bureaucracy to help out Slave Girl. All it does is tip off Sextillion that the Slave Girl might be worth a lot of money. After disposing of some moles, it’s revealed that Slave Girl has some hidden talents - she can help to find some missing jewelry.

Issue 10 starts off with a flashback to the day that Alana and Marko ran away together. In the present, Marko and Klara find Izabel and work to get off the soon-to-be-destroyed egg planet. The egg hatches into a massive timesuck, and The Will and Gwendolyn catch up with the rocketship, which is invisible to their sensors. Gwendolyn uses the force to fire a missile, but it only ends up causing damage to their own ship. Lying Cat gets sucked out

Issue 11 starts off with a flashback to Alana and Marko’s conception. Alana’s horrible at dirty talk, Marko is horrible at naming kids. The Will saves Lying Cat and sees the rocketship with his very old eyes. Marko throws a magic helmet into the engine to make the rocketship go faster, while Barr holds the ship together, but dies while doing so.

Issue 12 starts off with a flashback to Prince Robot IV’s time in the war. Adorable things were dying horribly. Special Agent Gale calls Prince Robot IV to check in. Robot IV makes his way to Quietus, where he meets a seal man with a walrus pack who directs him to the lighthouse. There, Robot IV meets D. Oswald Heist, shoots him in the knee, and pulls up the chair - unaware that the people he is looking for are already inside the house.

This is part of the comic book club. We’ll be posting one trade volume (or six issues) of Saga every two weeks until we’re caught up with what’s out. What we’re reading next is still up in the air, but you can post your suggestions here.

Please try not to post any spoilers for anything happening after this volume - we'll get to it eventually. If you're reading from an omnibus, this post's discussion starts with the full page picture of young Marko with his giant dog and ends on the full page of the family hiding in the lighthouse.
posted by dinty_moore (2 comments total) 1 user marked this as a favorite
So the real problem with Saga is that it introduces these weird characters/concepts and then the main cast leaves them and I just want to know more about them. Like the egg planet that had an abandoned civilzation. . . like, do the people that built shit on there only live on timesuck eggs? Do they go from timesuck egg to timesuck egg, building civilization after civilzation, probably helping nurture the egg somehow or protect it from space parasites (are their space parasites for timesuck eggs?), then jetting off to the next timesuck egg before it hatches? Are their war for these timesuck eggs? How does the giant fit in?

I mean, sometimes we do come back for the characters, but I just want to know more. Somehow this world and the people in it could be more sprawling.

Other things I love in this volume:

1. Seal dude with walrus pack animal.
2. The fact that Barr is spinning flowers into armor using the weirdest fucking spinning wheel ever.
3. Gwendolyn. her character design is great, but I also like that there are characters out there that aren't killers, but also not useless.
4. Lying cat always, but especially in these panels
5. The personalities that are emerging - both for the main characters (Alana has horrible impulses, but is more grounded, while Marko is a lot more idealistic but constant), and the side characters. Alana got herself into this situation because she hadn't really thought about it, Marko got himself into this situation because he thought it'd be fine. Barr and Klara have very different motivations for finding their son.
posted by dinty_moore at 6:12 PM on April 17, 2017 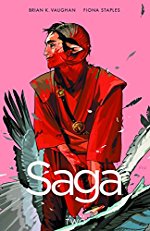