Rob Heubel returns as Ace Professor Brodfard Gilroy in this truly epic re-meeting of the minds! Where's everybody been? Who's everybody done? Is Katie ready for some Coop? Is McKinley ready to let go for a minute? Is everybody ready to see Ben's new nose? And will Mark & Claire ever tie the knot? Questions are raised, few are answered, hold your comments until the end of class!


1981, End of the Summer. Anyone who's seen the hit movie from which this bountiful font erupted will recognize the scene, as Coop, Katie, Claire, Mark, Susie, Ben, McKinley, Vic, Neil, JJ, Gary, Lindsay and Abby all make a solemn vow to meet up ten years later, at 9:30, which they will be able to be prompt about, as they'll be in the late twenties by then.

Still, nice of Wain to bring any newcomers up to speed.

The dulcet-ass tones of Mr. Jesus Jones make the time fly right by until we find ourselves in present day 1991.

Katie, now a make-up magnate with a lot on her mind and no time to lose, makes a few corrections on a hot 'n' fresh magazine ad, while ducking the question of what the fall's new color will be (like, damn, Katie, fall's almost upon us and some of us here need some god damn answers already.)

Victor and Neil, having clearly seen a pretty kickass movie a few years prior, are now behind the bar at an Upper East Side bar specializing in mixed drinks. Vic's bare chest glistens as he clowns around with shakers on his hands, the camera moving in to close-up to catch every pixel of his more complicated tricks, and serves up alcohol and mixers in highball glasses to ladies who whoop and holler when he jumps up on the bar to pelvic-thrust the air. Neil, as always, plays the hype man. Man, he knows his role!

His role, by the way, is not with Shari, who has left him. She's twenty six now, and has come to his apartment with a box of pretty dank 1991 stuff before heading off with-

-Brodfard Gilroy. Of Columbia. He's a professor there and has a nice car and is polite to Neil both in having heard about him and in explaining that was just a thing he said to be polite. He gives Neil an invitation to his sweet shindig that night, which sounds fun.

Gary now executive chefs at an Elite metropolitan fine-dinery, instructing a young waitressing padawan that "presentation is everything." He then follows this up by putting food in her hair.

JJ, having worked his way up the shark-chain at Kim's Video, is now all the way at the upground branch, warning customers away from participating in Hollywood's cynical cash-grab mythology of romance, and then bitching about the inferiority of major chains once they're presumably out of earshot. Specifically he is opposed to "When Harry Met Sally," which he also feels is derivative of "Annie Hall." CUT TO:

A hip Manhattan loft-style apartment. Mark and Claire have clearly grown up a lot in the past ten years: he's a high-powered yuppie, and she's a Greenwich Village bohemian, but one thing's for sure: she's still not ready to get married, while he would very much like to! Still, their chemistry is as hot as its ever been, probably because of Mark's new hair.

Lindsay introduces some hungry fancy dogs on the News At Noon, which must be a hell of a program based on Lindsay's meteoric trajectory at Rock 'n' Roll World Magazine ten years ago.

Susie wakes up next to some disposable dreamboat worried about missing their flight - presumably to Camp Firewood! She wears a leather jacket to bed in southern California in the summer which = crazy sexytimes!

McKinley panics a bit about the upcoming weekend, but Ben, who the years have treated very kindly, calms him down. He's found a nanny from a service, Renata (breakout star Alyssa Milano) who will take care of their adorable baby girl over the weekend, but, like, from camp. This isn't just their camp reunion, mind you: this is their tenth wedding anniversary!

BACK IN NEW YORK, POSSIBLY?

Coop. Oh Coop. Poor sweet tender too good for this world Coop. Melanie Lynskey loves your book about these our turbulent times, but you should know better than to give her a book without an ending! Books need endings! He promises he'll find one, but god knows when he'll find the time for that this weekend!

Mark and Claire carpool with JJ up to Maine, with JJ filming the other two the whole time, even though Claire doesn't want to be filmed. But from how JJ's sitting and holding the camera, he can really only get a close-up of Claire smiling and laughing in the frame, so them's the breaks.

Arty, The Beekepper, Solomon may be livin' it up, but Beth and Nurse Nancy done been riding these rails for a grip now. Beth gets existentialist about it all, but before she can go full-blown nihilist, JJ, Claire and Mark arrive. Everybody's ecstatic to see everybody else. Katie shows up and hugs, Vic and Neil arrive with half a six-pack. Gary I guess walked there and his life is in shambles. Abby Bernstein is writing a column about all the wild and interesting and semi-anonymous sex she's been having, which is something that Victor can, well... Victor works at a bar. Susie's boy-toy is none other than Garth, whose star is on the rise! He'll get a pint later with JJ.

The tableau is complete when Coop arrives, singing a sort of call-and-response that, if I may digress here... it feels like we're supposed to recognize this, but I've seen the movie and "First Day of Camp" and this feels shoe-horned in like something we should recognize but we can't, and it feels kind of confusing and cheap.

Susie tosses the crowd a stolen ALF pupet and Katie throws herself at Coop all subtle-like.

Beth raises her hand, which means the mouths go shut for a minute. She's got the boys in bunk eight and the girls in bunk six, with no sneaking out or else you miss free swim. Ben's reading Amy Tan's "The Kitchen God's Wife" and loving it, but that doesn't matter, because he, McKinley, baby Ashley and Renata get their own bunk! How convenient! Victor's got jokes.

In Bunk Six, Mark and Gary play some good ol' rafterball and discuss Mark's vague plans for cheating on Claire, which is not a conversation JJ enjoys overhearing! In Bunk Eight, Susie talks like normal people do about her life and work and how maybe just maybe making a film is like having a baby, and how Garth might get an associate producer credit depending on how well he does. The girls ask Katie about the new colors but she distracts them with free samples and what the fuck are you hiding, Katie?!

In the family bunk, Ben once again calms down McKinley about this whole Nanny concept, and mentions that these blueprints are really kicking his ass, which is the second time he's mentioned that, so it feels important. In Bunk Six, Victor starts teasing tales from his unending sexual odyssey, but Gary and Mark, who presumably have psychic powers, instead deduce him to remain a virgin yet still! Neil wants to take a nap like old times.

Beth promises a day of fun, while they reminisce about the little things that made the Summer of 1981 so special to them, sing a song together, and walk towards said promised fun. Mark gives JJ some good-natured ribbing about tripping while trying to keep up, but they both agree that nobody dances like Fred Astaire anymore. Also there's some super-secret evil-looking surveillance lab under Camp Firewood.

Random Notes: Victor was very good in his conversation with Abby. Neil timed him and everything.
posted by Navelgazer (6 comments total) 4 users marked this as a favorite
CLASSIC Mark and Claire moments in this episode. Those two...
posted by duffell at 5:55 PM on August 5, 2017 [6 favorites]

I spent like 10 minutes trying to figure out who Mark and Claire are. They've changed so much! Not like Ben, that guy is a constant.
posted by lunasol at 2:29 PM on August 7, 2017 [1 favorite]

I actually loved the call and response being brand new but also clearly pretending to be part of things all along. It was one of the few things that surprised me about the episode.
posted by SeedStitch at 6:18 PM on August 7, 2017 [1 favorite]

I mean they had eight weeks of camp of which we've only seen two days, plenty of time for them to develop and get tired of calls-an-responses.
posted by ckape at 12:50 AM on August 9, 2017 [1 favorite]

I spent the entire episode trying to remember Mark and Claire. I finally caved and looked them up and felt better knowing they were new additions.
posted by Julnyes at 7:56 AM on August 28, 2017 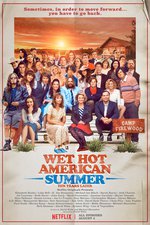