Do holograms dream of electric women?


It's time for Memory Alpha to take charge:

- The title of the episode pays homage to the spy novel Tinker, Tailor, Soldier, Spy by John le Carré. The 1979 BBC television serialization of that novel included veteran Star Trek: The Next Generation actor Patrick Stewart as the legendary Karla.

- Originally planned as a Neelix-focused episode, this episode was at first titled "The Secret Life of Neelix".

- Robert Picardo commented about this episode, "[It] was one of my favourites to shoot [....] It's some of the broadest comedy we did." When interviewed by UK writer Bryan Cairns for an article published in 2016, Picardo referred to this installment as "the last [VOY] episode I remember watching."

- This episode shows Robert Picardo wearing the red command division uniform. This places him among the few regular actors who have worn all three colors, as he regularly wears the teal sciences uniform and, in VOY: "The Swarm", he wore the gold operations uniform as the Alpha 11 Diagnostic program. He also wore yellow while playing the real Lewis Zimmerman in DS9's "Doctor Bashir, I Presume".

- This episode introduces the Overlookers to the series. They return in "The Void" and "Renaissance Man". The species' name is never mentioned on screen, but the name "Overlookers" comes from VOY episode scripts; in Trek publications, they are commonly referred to simply as the Hierarchy.

- The name of the character Phlox inspired the naming of the Denobulan doctor in Star Trek: Enterprise.

- Seven of Nine, to The Doctor, via PADD in one of his daydreams


"Warning: warp core breach, a lot sooner than you think!"

- Computer, in one of The Doctor's daydreams


"Warning: last chance to be a hero, doctor, get going!"

- Computer, in one of The Doctor's daydreams

- Chakotay, informing The Doctor he has the right to sit in the captain's chair


"That was a platonic gesture, do not expect me to pose for you."

- Seven, after kissing The Doctor on the cheek


Poster's Log:
Well, they clearly had an absolute ball making this, which helps paper over some of the squickier bits of the Doctor's fantasies. Part of me also wonders if using "the Doctor's personhood" as the hook for what is clearly meant to be a fully comic episode was the best story foundation (playing it for laughs and all), but on the other hand, it does give us plenty of Picardo, and they cap off the story with some nice growth in the crew's view of him and in his view of himself. I doubt most viewers would have preferred the Neelix version. And I don't know whether the whole Hierarchy concept was part of the original version, but it's a neat idea for a major alien race (they return in at least two more episodes) and it's well-suited to a comic episode.

The Doctor's alternate lyrics to "La donna e mobile" are wonderful and terrible and wonderfully terrible. As is Chakotay's line read when he says "We're becoming DRONES!"

Poster's Log, Supplemental:
I mean… it wasn't the worst song this franchise has given us that prominently features the word "illogical."
posted by CheesesOfBrazil (11 comments total) 4 users marked this as a favorite
I was secretly dreading this episode because of the Seven fanservice, but I ended up coming around a little (a little) because it was made clear that it was the Doctor's fantasy that he'd kept inside his virtual head. That puts it in a somewhat different category than Barclay or La Forge deliberately making holodoppelgangers of Troi and Brahms, even if the end result (having people walk through scenarios intended only for the original creator) ends up being roughly the same. That having been said, it's still kind of skeevy because of Seven's already being used for chronic fanservice; it would have been better (and funnier) if she had been posing as, say, the Mona Lisa. ("Her smile is... insufficient.") Not crazy about Janeway turning into a sexual harasser, either; that wasn't great even before #MeToo. There are way better ways of showing someone's internal fantasy map rather than reaching for cliches such as "all the chicks dig me and I'm the captain and I always save the day." (Point of comparison: the Black Mirror episode "USS Callister", although at least the EMH doesn't turn people who piss him off into big fucked-up spider things.) They could have even suggested something that was kind of inexplicable by going into a fantasy where there are all sorts of weird lights and odd synth music and all you can see are these out-of-focus CGI blobs floating in the foreground, and everyone turns to look at the Doctor, and he shrugs and says, "I can't explain it. It's just my thing."

Really, the funniest thing about the episode are the Hierarchy, aka the Potato People, as I thought of them. I wish that they'd made more appearances, as they manage the trick of being kind of ridiculous even as they post a plausible threat. They could have even had a thing where Phlox the First keeps calling them up and bugging them to let him join their crew.
posted by Halloween Jack at 6:34 AM on March 2, 2018 [3 favorites]

Particle of the Week: N/A this time.
Pointless STO Comparison of the Week: The Hierarchy show up in Star Trek Online during Delta Quadrant content. It's even possible to get one of them as a permanent bridge officer, (and his stats are actually competitive during endgame content - the Potato People are pretty badass, as it turns out).

Notes:
* The Doctor's opening number about killed me.

I mean… it wasn't the worst song this franchise has given us that prominently features the word "illogical."

Hahahaha. Okay, that is worse. However, I still thought I would bust a gut here.

* This is a weird echo of Darkling.

This is a second instance of the Doctor messing with his own program and ending up revealing internal issues with women, except 'funny' instead of 'serial killer' this time. I actually think Darkling worked better for me, partly because this is a strange well for them to be going back to, given he nearly killed a friend last time.

* This would've been better if they had broadened the focus.

Some of the 'all the women want him' gags worked okay for me, but they really dragged it out. I would've liked to see the Doctor fantasizing about more stuff: maybe seeing alien vistas, becoming an ace pilot (surely easier than command functions), negotiating peace with an antagonist race like the Hirogen, etc. etc.

As it was, the material they picked was funny in spots, but there was too much of it, and several spots were hard to sit through. On the good side: the Doctor painting Seven did amuse me, and I felt the warp core scene struck the correct balance.

On the bad: Janeway making him paw her in front of the crew, and him letting B'Ellana down gently.

I guess what I would've liked to see was a Voyager take on Ace Rimmer of Red Dwarf, (notably also a hologram). Jack's suggestion of something more abstract could've been fun too.

* I also liked the Potato guys.

Like Jack, I thought they were pretty good. I even liked the conceit of the one guy helping the Doctor to cover his own ass - it was a pretty believable resolution for such a goofy story.

Particle of the Week: N/A this time.

Thought about it, but I think they lose points for not actually having a photonic cannon, (which is a thing they should work on).
posted by mordax at 3:17 PM on March 2, 2018 [2 favorites]

I'm still a bit out of it from having a wisdom tooth removed, so no long comments this time, which is fine since most of my thoughts have already been covered.

I liked this episode in concept, and would have enjoyed it more in execution had they dropped the doctor's lust for Seven bit entirely, something that never should have been a thing in the way they chose to handle it. Why exactly would a photonic/computer program feel physical desire anyway? There's certainly no need for it in programming nor any need for physical gratification, so they would have been much better off making the doctor's issue one of more emotional/mental need absent physical desires and what the possible differences and boundaries are between those states and what that means for any potential relationships. making him just another sad sack, would be audience surrogate, lusting after Seven is tired and ugly.

Still, the rest of the episode worked okay for me and I liked the hierarchy and didn't mind them getting some later notice so it wasn't the worst episode, even as making it a fantasy could have been handled better by not visualizing it so the audience is getting the fan service instead of being more sensitive in the handling. That alone would have improved things a fair bit.
posted by gusottertrout at 5:53 AM on March 5, 2018 [2 favorites]

Why exactly would a photonic/computer program feel physical desire anyway?

I believe the conceit is that his personality is based on Dr. Zimmerman's, and his creator is indeed a sad sack about women.

Oh, sure, and if they had just left his personality like that of Dr. Zimmerman it makes some sense, in a sad way, but the physical drive, like that for eating should still be different. Even if the doctor can adapt his form to mimic the functions of a human, he would still, I'd like to think, have a different relationship to sexual desire than that of his maker. But I'm also sure that theory didn't interest the writers at all since they much preferred the "comic" potential of things as they are.
posted by gusottertrout at 12:18 PM on March 5, 2018 [1 favorite]

Agreed. I wish they'd spent a little more time thinking about how he should be different from a human generally.
posted by mordax at 9:22 AM on March 6, 2018

Just remembered another observation:
The framing of the Tuvok-crying shot in the teaser was very reminiscent, perhaps identical, to the framing of the Sarek-crying shot in TNG: "Sarek." I wonder if that was a deliberate callback, playing it this time for laughs instead of drama (though the "Sarek" version was a little bit unintentionally funny too).
posted by CheesesOfBrazil at 5:29 AM on March 22, 2018

I love the aliens in this one. The Hierarchy may be hostile bullies, but they are just so darn adorable and goofy!

Favorite moment, though, is when The Doctor is telling Torres that he can't be with her and he says, "he needs you!" Then we cut over to Tom Paris sitting with a cup of coffee, waving like a sad little goof. That's comedy gold right there.
posted by Saxon Kane at 2:53 PM on November 1, 2021 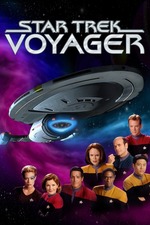