The story of the titular girl known only as "The Girl with the Black Hair" and her insanely long night of partying and drinking-complete with a book fair, festival, and many adventures in between. It is also the story of "Senpai," her upper class man who has been attempting to get closer to her by "coincidentally" running into her again and again. However, on this night, meeting up with her may be the greatest challenge of his life.


Gregory J. Smalley, 366 Weird Movies: A cross-dresser, a man who has vowed not to change his underwear, and a love-besotted student walk into a bar… Well, actually it’s a wedding reception, not a bar, and Night Is Short, Walk on Girl is not a joke, although it is a comedy. Nevertheless, that is the opening setup for a yarn that will quickly unfurl into a surrealistic nocturnal journey. The object of the student’s affections is the Girl, who starts with her own romance-free agenda: she wants to experience adulthood, and figures the best way to do this is through a night of heavy drinking. As she meets perverts, sophists and fellow drinkers, the evening develops into a quest for a mysterious liquor known as Imitation Denki Bran, climaxing in a drinking contest against an elderly pessimist. Meanwhile, her admirer has his underwear stolen and discovers his friend leads a secret team of electronically-omniscient high school hackers. And all that’s just in the first 20-30 minutes; the not-so-short night has many more wonders to unfurl, including another competition (this time involving lava-eating), musical numbers from “The Codger of Monte Cristo” (with meta-lyrics referring to both the main plot and subplots), and a flying fever dream finale.

Tim Brayton, Alternate Ending: The film feels inexhaustible. Stylistically, it never settles down, including flashbacks that are even more starkly, colorfully minimalist than the rest of the movie, often including just basic shapes that evoke characters rather than portray them. Narratively, it moves from rat-a-tat banter to elaborate slapstick setpieces to complicated hyper-narrative touches. And along the way, it stops for long enough to have a ten-minute musical sequence in which a guerilla play is interrupted by one lead actor declaring his love who is interrupted by a different actor declaring his love. The film feels like it understands no rules or limitations, and yet it never feels arbitrary or too much for the sake of muchness; perhaps the weirdest thing is that every new scene feels inevitable, just like very stylistic flourish seems to be the only possible way the film could have developed its characters and their messy emotions. It's everything, a movie about the bottomless energy of youth that itself possesses that energy and instills it in the viewer, and in a great year for animation, it's still pretty effortlessly one of the pinnacle achievements in any incarnation of that medium.

Trailer.
posted by sapagan (2 comments total) 2 users marked this as a favorite
This was delightful and so very Japanese. (Princess Daruma!!). I was not at all surprised to find out after watching that it was by the same director as Keep Your Hands Off Eizouken!
posted by mbrubeck at 2:09 PM on June 21, 2022 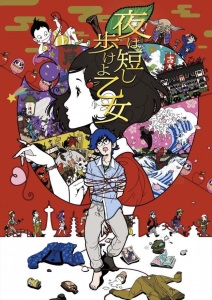