Five devastating human stories and a dark and moving portrait of Victorian London—the untold lives of the women killed by Jack the Ripper. Polly, Annie, Elizabeth, Catherine and Mary-Jane are famous for the same thing, though they never met. They came from Fleet Street, Knightsbridge, Wolverhampton, Sweden, and Wales. They wrote ballads, ran coffee houses, lived on country estates, they breathed ink-dust from printing presses and escaped people-traffickers. What they had in common was the year of their murders: 1888. The person responsible was never identified, but the character created by the press to fill that gap has become far more famous than any of these five women.


For more than a century, newspapers have been keen to tell us that "the Ripper" preyed on prostitutes. Not only is this untrue, as historian Hallie Rubenhold has discovered, it has prevented the real stories of these fascinating women from being told. Now, in this devastating narrative of five lives, Rubenhold finally sets the record straight, revealing a world not just of Dickens and Queen Victoria, but of poverty, homelessness and rampant misogyny. They died because they were in the wrong place at the wrong time—but their greatest misfortune was to be born a woman.
posted by Homo neanderthalensis (2 comments total) 6 users marked this as a favorite
This is a true crime book that isn't about true crime at all. Unlike so many books in this genre, it isn't about the killer- it's about the victims and the society that produced them. So many of us watch Victorian dramas about the young queen or detectives without having an inkling of the absolute horrors that were commonplace at the time. Not the killer that stalked Whitechapel, but the poverty, the workhouse, the misogyny, the alcoholism. All of the canonical five victims were slandered as sex workers in the Victorian press, even though only one actually was at the time of her murder, and one other had plied the trade in younger more desperate days. None of these women led conventional lives, even by today's standards, and by living outside the box to the Victorian mind they were all "fallen women". Rubenhold, who you might recognize from British Television lays down convincing evidence, that Jack the Ripper wasn't targeting prostitutes- he was targeting the homeless. Rubenhold connects the attitudes of yesteryear to today's fascination with serial killers, and the sort of misogynistic bullshit that led to the police and public reaction to the Whitechapel murders is what also led to Brock Turner getting six months in jail for "twenty minutes of action". In the Victorian mind the brutal murders were tragic, but what did those women expect? Rubenhold focuses on the singular lives of these women, and maybe with our modern obsession with Jack the Ripper, shows our modern misogyny hasn't changed all that much from our Victorian yesterdays.
posted by Homo neanderthalensis at 9:05 PM on May 23, 2019 [1 favorite]

This was a really fascinating book, and I ended up finishing it late on a work night because I was so engaged. I knew a fair bit about the conditions in Whitechapel in general, but this is an excellent look at what the place was actually like to live in - from the horrendous poverty to the social institutions and reformers trying to assist. It was surprising to me that even though people were so poor and in many cases forced to be transient because housing was so insecure, there was enough information to make a reasonable outline of these women's lives.

I'm a bit of a true crime fan, and have read occasional books on the Ripper murders. My view of the women as prostitutes was not a dismissive one in that I assumed that most of them had to resort to survival sex work. The insistence of some "ripper scholars" to keep the women reduced to one dimension should be baffling, but I suspect it takes the "fun" out of treating the story as simply a fun puzzle to be solved.

I really was fascinated to see how the various women's lives actually played out, with most of them forming monogamous bonds that were frequently outside marriage but which placed them on the fringes of the social order. And then having only occasional access to housing meant they were frequently asleep on a dark street, with all the danger that implies.
posted by PussKillian at 9:22 AM on May 24, 2019 [1 favorite] 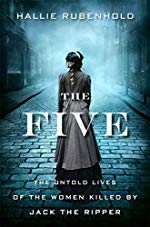