In Furiously Happy, #1 New York Times bestselling author Jenny Lawson explores her lifelong battle with mental illness. A hysterical, ridiculous book about crippling depression and anxiety? That sounds like a terrible idea. But terrible ideas are what Jenny does best. As Jenny says: "Some people might think that being 'furiously happy' is just an excuse to be stupid and irresponsible and invite a herd of kangaroos over to your house without telling your husband first because you suspect he would say no since he's never particularly liked kangaroos ...


"Most of my favorite people are dangerously fucked-up but you'd never guess because we've learned to bare it so honestly that it becomes the new normal. Like John Hughes wrote in The Breakfast Club, 'We're all pretty bizarre. Some of us are just better at hiding it.' Except go back and cross out the word 'hiding.'"

Love this book. I also loved her first one, but this one seemed to delve further into the the meat of the stories she was telling. I found that hearing more about her feelings and motivations made it easy to find myself in them, to have that moment of "oh yea, I have totally been there" Maybe I'm just the same kind of weirdo that she is, but it's fun to find your kind of weirdo!
posted by 5_13_23_42_69_666 at 9:52 PM on May 28, 2019 [1 favorite] 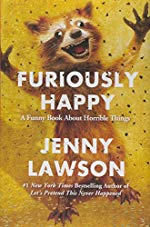