León is pursued by the Knighthood of the Black after the innkeeper's wife mistakes him for Prince Alfonso and reports him. In the subsequent fight with the Black Knight, León has to be rescued by Ema, but the Black Knight interferes with the rescue attempt. León wakes up in an unfamiliar neighborhood, where people call him Pepe, and his own memories are fuzzy. He learns the local church selects children to send to a place called Lograja, but things may not be as they seem.
posted by needled (2 comments total)
I want to call this a side story as we don't really learn much about the main plot other than Leon isn't strong enough to fight the Black Knight yet. Do you think this is where the time skip starts as they finally went their own ways?

Although, I did like how even in that serious moment his father kept to his original personality. I'm not so worried about his son because he seems to be a sensible and responsible person for age but his father on the other hand (?).

Oh and I swore I thought Leon was 16 years old but now we've gotten confirmation he's actually 17 during the short conversation. Um, the only weird part is how almost every village they found were somehow evil or corrupted.

I did wonder why his father never showed up to "rescue" Leon from the Horror? OK, I guess he might've been too busy in town but his son went missing from what I assume is a few days and all.
posted by chrono_rabbit at 12:00 PM on November 17, 2014

This episode felt really disjointed to me, like the writer knew they had to fill up 20 minutes but wasn't quite sure how - they knew they needed a fight scene with the Black Knight and a fight scene with a Horror but had to fill up the rest of the time somehow. Rather than this I would have preferred some backstory on Ema or Rafael. I guess we'll get some Germán backstory next week?

And where was Zaruba in this episode? Why does Zaruba have a gag on him in ring form? In the TV drama series Zaruba is very chatty. to the annoyance of its wearer at times.

I think the voice narrating next week's preview may be that of Germán's madogu - I wonder if that was the mirror he was holding at the beginning of this episode.
posted by needled at 6:00 PM on November 17, 2014 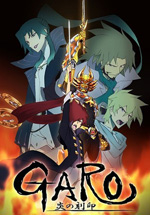