A foul-mouthed parrot becomes the key to Bunny's last day on Earth, which reveals surprising people who crossed her path, furthering the need for our trio to solve her murder.


The trio tries to find out what Bunny's last day was like before she died. In a flashback, it is revealed that it was Bunny's last day as board president and she considered moving to Florida after her retirement. She received a phone call from a mysterious person who wanted to buy her painting, but she rejected it. She also gave present money to her regular café server, Ivan, so he could pursue his dream to become a DJ and easily fixed the elevator when she, Charles, and Mabel got stuck in it. At the end of the day, she realized how much the Arconia meant to her and decided not to retire, upsetting her successor, Nina Lin, who openly threatened her to step down. Later, Bunny visited Charles, Oliver, and Mabel, offering a bottle of champagne in hopes of joining their celebration, but they eventually didn't invite her. A masked and gloved figure attacked her when she returned to her apartment. The trio feels guilty that they could have saved Bunny's life with a simple act of kindness. They realize that Nina had enough motive to kill Bunny, making her the prime suspect in the investigation.
posted by BlahLaLa (7 comments total) 7 users marked this as a favorite
Oh no, that encounter with Bunny bringing them champagne was so painful. My boyfriend yelled "invite her in" at the screen twice before they closed the door.

I loved Bunny's little encounters with the street vendor and the waiter. Contrasting so strongly with her treatment of Lester, the doorman, handing him litter while he is eating a slice of cake. This episode did a great job of showing how that sense of responsibility for the building got in the way of Bunny's relationships.

And then her calmly fixing the elevator! Such a great way to show her care and knowledge of the Arconia.

I had a lot of feelings about this episode, heh. I was never very invested in Tim Kono's death tbh, but now I want justice for Bunny.
posted by the primroses were over at 4:34 AM on July 7, 2022 [14 favorites]

I wish there had been a little more exposition about why Bunny was leaving. Is "chairman of the board of your apartment building" like a real job in New York City? Was this literally her retirement from her career?
posted by Etrigan at 9:09 AM on July 7, 2022 [2 favorites]

I think it was retiring from her career, more or less. The episode indicated that it was originally her idea to move on...then she changed her mind.

It was a very touching/sad episode.

Nina is terrifying. I presume it's too easy to have the pregnant lady be the killer, but I kind of wish because eeeek!
posted by jenfullmoon at 10:05 AM on July 7, 2022 [2 favorites]

Our early focus is on Cara Delavigne pestering Bunny for the "balls forward" artwork. After all, she owns a gallery and said something about being interested in historical pieces. Not sure she would kill Bunny over it, but it's definitely suspicious.
posted by Ben Trismegistus at 1:07 PM on July 7, 2022 [3 favorites]

What a splendid episode! What really bonded me to the first season of Only Murders in the Building was how generous it was in its empathy. Having been… not exactly a one-note character in the first season, then no more than a two-note character either, Bunny was given a short movie of her own here. I honestly could’ve spent at least another hour happily in her company.

There was a lovely interview with the great Jane Houdyshell in Vanity Fair about playing Bunny.
posted by Kattullus at 8:51 AM on July 8, 2022 [15 favorites]

If I was a resident of the Arconia and heard that Season 3 had been approved I would seriously consider moving out. Especially if I was Howard.
posted by ActingTheGoat at 11:18 AM on July 12, 2022 [18 favorites] 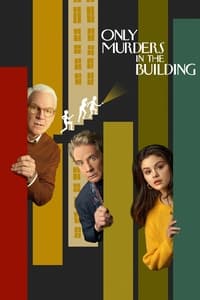