A Phoenix secretary steals $40,000 from her employer's client, goes on the run and checks into a remote motel run by a young man under the domination of his mother.


Roger Ebert: Hitchcock deliberately wanted "Psycho" to look like a cheap exploitation film. He shot it not with his usual expensive feature crew (which had just finished "North by Northwest") but with the crew he used for his television show. He filmed in black and white. Long passages contained no dialogue. His budget, $800,000, was cheap even by 1960 standards; the Bates Motel and mansion were built on the back lot at Universal. In its visceral feel, "Psycho" has more in common with noir quickies like "Detour" than with elegant Hitchcock thrillers like "Rear Window" or "Vertigo."

NYTimes: That's the way it is with Mr. Hitchcock's picture—slow buildups to sudden shocks that are old-fashioned melodramatics, however effective and sure, until a couple of people have been gruesomely punctured and the mystery of the haunted house has been revealed. Then it may be a matter of question whether Mr. Hitchcock's points of psychology, the sort highly favored by Krafft-Ebing, are as reliable as his melodramatic stunts.

Entertainment Weekly: In the famous shower scene, when that big, fat kitchen knife, wielded by a mysterious Victorian shrew named Mrs. Bates, came slashing down, over and over again (Skree! Skree! Skree!), into the body of Marion Crane, it was also slicing through years – decades, centuries – of audience expectation that the hero or heroine of a fictional work would be shielded and protected, or would at least die (usually at the end) in a way that made some sort of moral-dramatic sense. In Psycho, murder made no sense at all; the suddenness – and viciousness – of it tore at the fabric of our certainty. What it suggested is that none of us, in the end, are ever truly protected.

BBC: "They [audiences] had never seen anything quite like it before - the total shock of killing off a lead character a third of the way in, and just the complete feeling of disorientation," says Michael Brooke, Screenonline curator at the British Film Institute.

Psycho was filmed in black and white - unusual for Hitchcock by that stage of his career - partly to cut costs, but also to manage the graphicness of this scene. Hitchcock knew he would not get shots of red blood splattering the wall and floor past the censors of the time.

"The shower scene in colour in 1960 would have just been unshowable," says Mr Brooke.

The Guardian: Its edgy exploitation aesthetic and taboo-breaking "toilet flush" shot (even more controversial than the shower scene) have meant Psycho forged a template for the money-spinning slasher franchises that still thrive – or fester? – today. It directly inspired Halloween (which starred Janet Leigh's daughter, Jamie Lee Curtis) and Friday the 13th (in which the murderous mother-son relationship is sneakily reversed), and spawned a string of sequels including a TV movie that brought Bates's legacy into the direct-to-video age.

Senses of Cinema: The game that Hitchcock loved to set up was one played out at the limits of privacy. There is nothing original, once again, in locating this theme at the core of Psycho. From beginning to end, the film’s narrative never stops turning around the question of privacy, as critics have abundantly shown.

The Greatness of Psycho

Extract from A Long Hard Look at Psycho

Shower Scene
posted by MoonOrb (8 comments total) 3 users marked this as a favorite
I love Hitchcock, and I deeply regret never getting to see this film unspoiled. Somehow its most important or iconic scenes had filtered to me by the age of 14 or so when I first saw it, so my first viewing was just filling in some plot holes. Unfortunately, since I knew not to get attached to Janet Leigh, I don't think I ever experienced the first half hour of the movie the way I was supposed to, which meant I was never disoriented for the back half of the film. I still have a hard time really engaging with the first part of the movie instead of just superficially looking for symbolism and tropes (see how her underwear goes from white to black!) while I wait for the "actual" movie to start.

I can think of only one other Hitchcock movie where the effect of the suspense/mystery relies so heavily on thwarting filmgoers' ingrained expectations of what you're "allowed" to do in commercial movies. So much of his subversion was with Hays code, and so much of his innovation was with visual and audio effects - it's kind of astounding that he also cared about upending the basic structure of movie storytelling, too.
posted by alligatorpear at 9:00 PM on May 2, 2016

Oddly, I find the first act -- everything up to the arrival at the motel -- weirdly hypnotic. I feel like I could watch it over and over. (I don't know why. Maybe something about the escapist fantasy of running away with a bag full of money, and the simple playing-out of the doomed mechanics of the fantasy? Simple, but somehow dreamlike: the just-sufficiently-long-ago-to-be-defamiliarized setting; those disjointed close-ups of the cop, with his hidden eyes...) I tend to disengage after that point, admiring it without being absorbed in it.

I can't imagine being a film critic and wanting or having to write about this movie, feeling all the weight of past exegeses. But for an extremely casual, unsophisticated movie fan, it's fun to be able to dip into stuff like the articles MoonOrb has linked here and come away with new and interesting ideas.
posted by Gerald Bostock at 1:23 AM on May 3, 2016

Yeah, I don't know how you come to this movie without at least knowing the shower scene, so the first half of the film can never be what it was back when the film was released. I've tried to put it out of my mind, study the first half as if I don't know what's coming next. There's a lot of complexity to Marion's motivations and there is a lot going on once she's stolen the money, she's feeling guilty and is having second thoughts. At what point does the guilty overwhelm her to the point where she decides to take the money back? Obviously too late for her to actually do it. And then the storm comes and she has to find shelter.
posted by crossoverman at 5:07 AM on May 3, 2016

Oddly, I find the first act -- everything up to the arrival at the motel -- weirdly hypnotic. I feel like I could watch it over and over. (I don't know why. Maybe something about the escapist fantasy of running away with a bag full of money, and the simple playing-out of the doomed mechanics of the fantasy?

In a lot of ways, that entire first act works as a sort of "anti-Hitchcock" set-up. You're sitting there, waiting and waiting for the crux of the story to show-up. Someone steals the money from Marion, the money turns out to be counterfeit, the guy buying the property is a spy...something Hitchcockian. And, Hitch plays it out so tortuously by making it all so mundane. You just know there has to be something unforeseen about to happen. Yet, nothing happens. I believe Hitch knew exactly what he was doing in exploiting his own style.

That's always been a problem for films like this, of course. Movies that become important classics, yet hinge on very specific moments or reveals. Like Rosebud in Citizen Kane, for instance, or "I am your father" in The Empire Strikes Back. They just can't have the same impact for future audiences.
posted by Thorzdad at 7:00 AM on May 3, 2016 [1 favorite]

I saw it at a repertory theatre with some friends in college. I was envious of the ones who somehow didn't know about it. Even though it was my first time, I knew what to expect.

Of course, first-timers were wondering why other audience members were chuckling at lines like "A boy's best friend is his mother. "

There was an interesting article in the Wall Street Journal a few years back arguing that Bernard Herrmann's score is what really elevates the movie (and arguably anticipates minimalism). While I'm wary of trying to rank such things, I think that it's definitely a major factor.
posted by pmurray63 at 10:39 AM on May 4, 2016 [1 favorite]

Hitch said in his interview with Truffaut that the shower scene was the whole reason for making the movie. He was playing a game with the audience—they can't help trying to guess what's going to happen next, and he hoped that after Marion was killed they would be so thrown by it there would be no chance of their anticipating how it would play out. He said that if he were making the routine thriller that Psycho appeared to be in its first 45 minutes, Vera Miles would have played Marion and Janet Leigh would have played Lila.

Hitch stated repeatedly that a logical, sensible plot was far down on his list of priorities. He cheerfully admitted that North by Northwest makes little or no sense at all.
posted by Flexagon at 8:08 AM on May 6, 2016

The Evolution of Horror podcast (which is terrific) did an episode on Psycho and Peeping Tom.
posted by DirtyOldTown at 6:20 AM on December 21, 2021 [1 favorite]

I had forgotten how positively beautiful young Tony Perkins was.
posted by DirtyOldTown at 6:49 PM on January 7, 2022 [1 favorite] 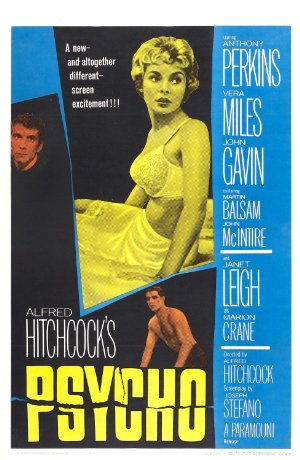