Kimmy finds her mom. Jacqueline finds a cause. Titus finds where he belongs.
posted by DoctorFedora (17 comments total) 4 users marked this as a favorite
Random thoughts:

• Ian Roberts is still typecast as an unhappy/unlucky astronaut, even all these years after the UCB taught us out prejudice against astronauts.

• Titus's storyline worked out more or less 100% in character, letting him be self-absorbed for the maximum time possible, to the extent that he shakes off more or less all of the War of Northern Aggression-ness

• Jacqeline's story is just kinda… egh. Trying to figure out the writers on this one, because the entire third episode was spent as a take-that toward strawmen of people critical of their tacky depictions of other races in the first season (including a needless pot shot at someone criticizing it without actually being part of that minority), while now we have a major story line built more or less entirely on criticizing a tacky depiction of another race, with an actress who isn't part of that minority, but THIS is totally cool, because reasons.

• It's been great seeing Kimmy's character development, because they're actually doing a great job with that! Stuff like the Velcro fear reveal or her (hilarious high-fiving) realization that she isn't going to fix everything with her mom, and that's OK. Or, more broadly, that sometimes things are going to never be totally OK, and that's OK.

• What happened to the other mole woman? They LITERALLY PUT HER ON A BUS and she just vanished from the show entirely. Presumably she's showing up again next season at some point?

Titusville is a real place. I grew up there. While the rocket garden scene at the space center is real (although it looked like they just green screened Titus in), the restaurant and space center visitor center were sets somewhere. Shame; they were filming in Orlando at Universal for this and it's maybe an hour away from Titusville. They were right there! Oh well, maybe some other time.
posted by Servo5678 at 3:27 PM on May 19, 2016

Jacqueline's plot this season was a complete mess. Should have spent more time on Zanthippe instead.
posted by porpoise at 3:55 PM on May 19, 2016 [1 favorite]

Should have spent more time on literally any other named character, is more like it. Show us her parents, even! They are an adorable delight!
posted by DoctorFedora at 4:42 PM on May 19, 2016 [1 favorite]

Trying to figure out the writers on this one, because the entire third episode was spent as a take-that toward strawmen of people critical of their tacky depictions of other races in the first season (including a needless pot shot at someone criticizing it without actually being part of that minority), while now we have a major story line built more or less entirely on criticizing a tacky depiction of another race, with an actress who isn't part of that minority, but THIS is totally cool, because reasons.

I think the point in the 3rd episode was to lampoon people who kneejerk to screaming about cultural appropriation before even evaluating the work in question. So they were all discombobulated when it turns out that, in this universe, a gay black dude can give a thoughtful, respectful, and beautiful performance as a geisha.

Here, we're talking about the Redskins -- nothing thoughtful, respectful, or beautiful about it. I also think that this season was about Jacqueline realizing that she's not Native American, at least not anymore. From when she goes home, and is treated (and mocked) like an outsider. When she can't stop herself from stealing the peace pipe because "tobacco is bad for you". She doesn't know what a dreamcatcher does. She can't even see without her "blue contacts." Now, in this episode, she says "My parents are Lakota Sioux" not "I'm Lakota Sioux."

Jacqueline now wants to do what's right for her parents and their people, but I don't think she's trying to be one of those people anymore. Which is part of why I've never really seen what the big deal was with Jane Krakowski playing the role.
posted by sparklemotion at 7:17 PM on May 19, 2016 [5 favorites]

This is a legitimately interesting point! I am willing to give the writers the benefit of the doubt on this and assume that it was a deliberate thing.
posted by DoctorFedora at 7:45 PM on May 19, 2016 [1 favorite]

I totally lost my shit when Lisa Kudrow showed up as Kimmy's mum. So perfect. And the buildup was great, making us believe she was kinda dumb and useless and didn't handle Kimmy's kidnapping well... right up until the "Sometimes you just have to scream" line. It floored me. Surprisingly deft work from the writers there, and she absolutely nailed it.

Just don't know anymore what on earth they're trying to do with Jacqueline's story. At the end of S1 I was convinced they were going to reveal her as being adopted, because that seemed like the only way to get themselves out of the racism. So far, no. And is it just me or is the anti-Semitism around David Cross' character absurdly awful?
posted by feckless fecal fear mongering at 7:23 AM on May 20, 2016 [1 favorite]

And is it just me or is the anti-Semitism around David Cross' character absurdly awful?

I don't think I even clued into the fact that David Cross' character was supposed to be jewish until you made this comment.

To me, he started out as the stereotypical evil lawyer ("stealing" Jacqueline's painting, and then caring more about his work than her on a date), but then you realize that he does all of his work pro bono, and is passionate because there's no one else who cares. And he doesn't want to open up in a relationship because he's been hurt before (by women trying to do the exact same think that Jacqueline was originally trying to do).
posted by sparklemotion at 7:52 AM on May 20, 2016

In a previous episode she says "I hope you're one of the Jews who has sex through a sheet" which just... record scratch.
posted by feckless fecal fear mongering at 7:58 AM on May 20, 2016 [2 favorites]

I thought that was just Jacqueline making assumptions because of the beard.
posted by rikschell at 9:20 AM on May 20, 2016

So. Like how much of the interesting stuff about this season has been about Class or The Insane Demands Put On Being A Woman In A,Erica?

Kimmy really accessing her rage and hurt was such a ....turn I was not expecting a frothy sitcom character to take. Or her mother being that brutally honest (Cause she does the same thing Kimmy does! Tries to steamroller over "bad thoughts" with good ones! It's exactly what Andrea was talking about!)
posted by The Whelk at 10:10 PM on May 20, 2016 [3 favorites]

Can I just say that filming the pivotal scene on the rollercoaster was amazing? "THIS IS FUN"

And the almost thrown away savaging of the MRA coaster attendant was delicious.
posted by feckless fecal fear mongering at 10:41 PM on May 20, 2016 [2 favorites]

The R******s twist completely redeemed the Jacqueline storyline to me, because, as someone from DC, the Snyder family being the villains in a beloved mainstream show will never ever not be a religious experience. I hope the entire next season is devoted to the two of them taking over the team, Ned Stark-ing Dan from Sports Night, and them hiring back Rg3.
posted by Potomac Avenue at 5:52 AM on May 23, 2016 [1 favorite]

The Rollercoaster. Such a powerful metaphor. I especially love that nothing is resolved, Kimmy doesn't even forgive her mom, she just gets mad, her mom barely listens, and then it's like OK well, see you at Christmas maybe! You don't have to forgive your parents, but your life and soul will be much easier if you act like you have, believe me.
posted by Potomac Avenue at 5:56 AM on May 23, 2016 [1 favorite]

In the "easy-to-miss-joke" category, the bus Titus is supposed to get on to Miami is from the "Jerome Bettis Lines" bus company. Jerome Bettis is a former football player whose nickname was "The Bus".
posted by Rock Steady at 8:49 AM on May 25, 2016 [3 favorites]

I recognized Phoebe's voice in the magical Disney princess fairy vision and had a hunch she'd be the mom, but oh it was a hope I dare not speak its name. And she was perfect.
posted by sweetmarie at 4:11 PM on May 26, 2016 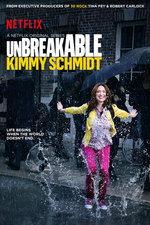