Searching for their literary hero, new parents Marko and Alana travel to a cosmic lighthouse on the planet Quietus, while the couple's multiple pursuers finally close in on their targets. (Issues 13 - 18)


A short summary of this volume:

Issue 13: Two reporters interview one of Prince Robot's former soldiers at the Landfall VA center about Alana and Marko. Klara doesn't approve of Alana's love of D. Oswald Heist's literature. The Will, Gwendolyn, Slave Girl, and Lying Cat are all stuck on a planet waiting for the repair guy to show up. The family arrives on Quietus, only to be attacked by some skeletons, then saved by a cyclops in some Y fronts and a bathrobe, holding a gun and a bottle. The Will starts hallucinating the Stalk, and renamed Slave Girl Sophie

Issue 14: The two reporters, Upsher and Doff, interview Alana's stepmom. Alana gushes over Heist, and then Heist releases his own effluvia over Hazel. They still go home with him. The Will has offered a prize for a wooden rocket, but wants to retire, for real this time. He also kisses Gwendolyn on hallucinatory-Stalk's behest. It doesn't go over well. Heist and Klara have a talk. Sophie and Lying Cat have a talk. The Will and Gwendolyn get a tip that Prince Robot IV is on his way to Quietus.

Issue 15: Upsher and Doff interview Alana's former commander, who didn't think too highly of her. Upsher takes a bullet in the shoulder. The repair guys finally show up for The Will's ship, and The Will agrees to go with Gwendolyn and Sophie to find Alana and Marko. The family has a board game night, and Klara and Alana disagree on how to be a mother. Sophie starts hallucinating, then stabs The Will in the neck.

Issue 16: Upsher and Doff interview Special Agent Gale, who tries to convince the reporters that Alana is a spy. They seem skeptical. Special Agent Gale sets The Brand on them anyway. Heist nudges the new parents toward the circuit, and Marko tries to convince Alana that it's a good idea for her to audition. Gwendolyn starts hallucinating, kinds Sophie, and keeps everyone alive enough to head to Quietus to find Marko. Klara and Heist flirt/debate, until Heist noties Prince Robot IV heading for the door.

Issue 17: Upsher and Doff are visited in their home by The Brand, who informs them they are off the Alana and Marko story, or it will cost them their lives. While the events of Issue 12 happen in the lighthouse, Gwendolyn and Lying Cat stand outside and plan to convince Marko to help The Will. Prince Robot IV's monologues, Klara makes her stand, and a firefight breaks out. Robot IV, has a broken screen, but everyone is alive . . . until Gwenolyn breaks in, and uses The Will's lance to take out Heist's eye.

Issue 18: With the lighthouse on fire, Gwendolyn goes looking for Marko. Klara tries to bait Lying Cat into taking her life, but Izabel frightens Lying Cat off. Gwendolyn finds Marko and asks him for help with The Will, but since the Will isn't from Wreath, it won't work on him. Prince Robot IV reboots, but he's missing some system memory. Gwendolyn threatens Alana and Hazel, but Marko pushes them off the lighthouse - luckily, Alana's wings aren't just vestigial, and Gwendolyn is knocked out by the heartrender. Upsher and Doff try to find a way around the potion they've been given. The Brand finds The Will, and we find out that The Brand is his sister. Gwendolyn, Lying Cat, and Sophie leave them to it. After a time jump, Hazel takes her first step. 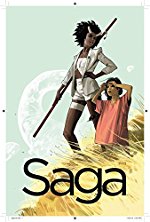