A documentary that loosely follows avowed dirty trickster Roger Stone through the 2016 campaign while reviewing the broad outlines of his career - from outsider, to Reagan campaign insider, to consultant, to outsider and insider and outsider (and insider?) again, all loosely framed around his (claimed) desire to someday run Donald Trump as a candidate for President. Featuring interviews with Stone, Paul Manafort, Tucker Carlson, Trump, and many others.
posted by Going To Maine (2 comments total) 1 user marked this as a favorite
It’s difficult to evaluate this documentary well, in part because it would have played so differently had the election broken the other way. Indeed, I think it kind of loses the underdog vibe that dogged the Trump campaign for all of 2016 - Stone come off as a David S. Pumpkins figure; he’s his own thang, off creating chaos for the sake of the chaos, and so in many ways the totality of the upset is kind of lost. Which - perhaps that’s how it felt on the other side as well? But I really don’t believe that, especially given the President’s fixation on it. So something is lost in this documentary, I think - some sense of the why is missing. I don’t know that that’s essential; I’m not sure that plumbing all of the ins-and-outs of the Stone id-monster are necessary - but there’s an absence that I can’t wrap my finger around.

Also, I think the movie glosses over a lot of the lobbying that Stone did, and that seems like it should really get some more attention in its specifics. We get the idea that he was hot, but not the actual how of it, not the dictators and events in any particular detail.

I thought it bought into too much of his mythology at the beginning, or at least just let his own take on himself stand without giving me any context. I hadn't even heard of this guy before a year-and-a-half so so ago, and I keep up with politics. If I'd known he worked closely with Lee Atwater earlier, or known that Atwater had been a part of the lobbying firm that Stone was with, that would have helped. Atwater cast a long shadow in American politics of the '80s, and for many a year afterward, not Stone. Then it started with him talking about working with Nixon. He was, what, all of 20 or something when Nixon won reelection? He wasn't anyone important then. FFS.
posted by raysmj at 1:39 PM on June 8, 2017 [1 favorite] 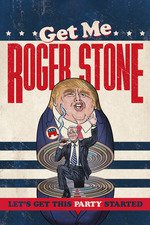