Thackery does lots of coke. Everett prescribes an emetic  to someone with an eating disorder. Barrow gets salt water from his loan shark instead of cocaine. Disregarding the evidence in front of his nose, Bertie hits on Nurse Elkins and she gaslights him. Bertie also refuses to admit that Thackery is a hop-head. There is one patient in The Knick who doesn't care that Dr. Edwards is black. Finally, we learn that 'golden lotus' means foot not a portion of a woman's nether regions. ‎


Thackery gets caught stealing cocaine from a pharmacy. Why he couldn't just buy it from the pharmacy is never explained. There's an hilarious exchange when Dr. Richardson is bribing a cop to drop Thackery's charges. The cop's tone is laconic, Barrow is agitated and affronted.
‎
Captain: Every night we arrest desperate hopheads
Barrow: He is a white man! Those are immigrant crimes!
Captain: ‎He was holding a hypodermic needle.
‎Barrow: He is also a practicing doctor!
Captain: And he had removed his shoes. ‎
‎‎
Nurse Elkins turns prostitute to get cocaine from Thackery's opium den but tells him she sold her bike to get it. She then steals coke from a German hospital. God, she's an idiot through and through. All that's left now is for her to get pregnant and believe that means Thackery will marry her and that if he did, that would be a good idea. She is in a terrible place and she doesn't even realize it.

As we know, Coke used to contain coke--the good old days. Thackery cooks up the remnants of Cokes* to shoot up (unproductively it appears).‎ Then he tries to sell his name to the drug rep (whom we last saw being kicked out of Thackery's office) for DRUGS! Who knew? So shocked am I. Guess who gets kicked out of whose office this time around?
‎
So I called it last week. Eleanor killed the baby. I'm surprised the writers went there. Though it is Everett's fault for forcing the second child upon her, his wife is the one taken away in restraints. Asylums were horrible places for women.
‎
Algie and Cornelia were fooling around without protection. As rubber condoms were available in 1844, I'm pretty ashamed of them both.  Edwards is, however, extremely deluded as he wants her to keep it. Of course she can't keep the baby. Her family would disown her, you'd be kicked out of The Knick, no respectable boarding establishment or landlord would have you two as a couple. What the hell is wrong with you, Dr. Edwards? He refuses to perform a D&C, forcing, at least for now, Cornelia to carry an unwanted pregnancy. This is a horrible place for a woman to be.
‎
*Someone argued the bottles could be cocaine vials but all the vials we've seen have been just that, vials; small bottles. These are large drink-sized bottles clearly stamped with "Coca-Cola." Also, the liquid is soda-colored.
posted by Ik ben afgesneden (1 comment total)
Thanks for the recap; I had missed what exactly was in those bottles that Thackery was boiling down.

I'm never quite sure if I like this show. I love the historical medicine but I hate Thackery, and I hate to see Elkins throwing herself away after him, Dr. Troubled Male Antihero. Also, I was uncomfortable with the Wu scene, and I'm not sure if that's because it was racist or because it was just disgusting, which is acceptable. (Elkins doesn't have a "golden lotus" -- that's a term of art for an exceptionally tiny and crippled foot. By such standards, the daintiest unbroken foot is gross.)

Algie is anachronistically accepting, but then, so is his plotline, and he is heart-rending in it anyway. The most chronologically accurate thing for Cornelia to do would be to go on the same tour of Europe that Edith did on Downton Abbey, where she would either give birth or have the baby aborted, depending on what kind of plot bomb the writers want to drop.

The death of the baby was a punch in the stomach. No complaints here. That was real Wisconsin Death Trip stuff.
posted by Countess Elena at 4:09 PM on October 13, 2014 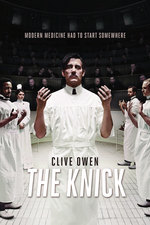